Los Angeles Clippers: Basketball Gods Why Have You Forsaken Me?! 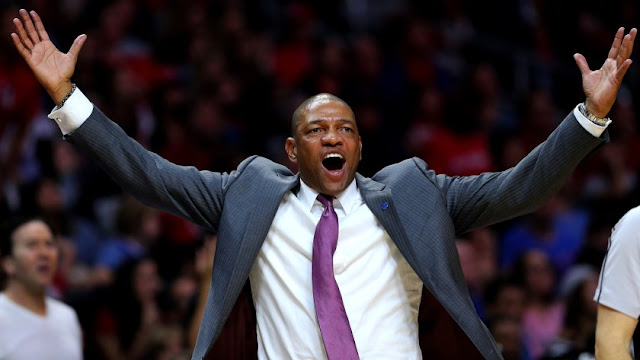 The Clippers franchise can’t seem to catch a break

Any true Clippers fan knows of the dreaded Clippers Curse. It is for real. Every Clippers fan knows it. Every season we fans expect something bad to happen as an inevitability. We know not to get too happy when things seem like they are going our way. We know it is too good to be true. This abbreviated season being the perfect example.

This was supposed to be our year. For the whole season we were right up there with the Lakers as the odds on favorites to win it all. We pulled off the coup of the off-season in acquiring Kawhi Leonard and Paul George, while retaining the core of the team that in the previous year took their long time nemeses Golden State Warriors to 6 games in the first round.  Taking two games on the road, one of which was a miraculous 31 point comeback.

We have everything from the top on down within the organization to finally get past the curse. This includes a great owner in Steve Ballmer, best executive in the history of the sport in Jerry West, championship caliber coach in Doc Rivers, two superstars, and a terrific supporting cast. All the pieces were in line. They were even able to pull a move before at the trade deadline in trading Mo Harkless for the highly coveted Marcus Morris. In mid March we were 7-3 in our last 10 games and they were looking like they were finally beginning to really gel as a team. They had been battling injury the whole season but just as everyone was coming back and things seemed to be setting up great for them to peak at the right time going into the playoffs, the worst thing in the history of sports happened. Its name….COVID 19.

This freaking plague saw (thanks largely to the negligence of one Rudy Gobert, but I won’t get into that here) to the indefinite postponement of every major sport. There is a good chance that despite the best efforts of the leagues involved the seasons may not resume at all.

The Clippers may have been robbed altogether of the chance to lose spectacularly. This was the best team they ever had so of course the season gets halted. The basketball gods would not have it any other way. Clippers win a championship? Can’t be having that. Heaven and Earth had to been shaken for them to get to there and Heaven and Earth shook right back, and then some. Having me curse the heavens once again as I have done so many times before.

Call it luck, call it fate, call it karma, call it the will of the basketball gods, whatever you call it, things historically just do not go the Clippers way. They have never made it past the second round of the playoffs. It’ll make a believer out of even the strictest of skeptics. Throughout most of their history they as an organization have been allergic to success. This was mostly due to poor ownership. Arguably the worst ownership in the history of sports.

What Gypsy did Donald Sterling piss off for these things to happen seriously?

Still, even in spite of that, when they found themselves with a good team and on the brink of making history they would find themselves crashing down in flames. Whenever it seemed like they were assuredly getting to the Western Conference Finals, the Clippers Curse would go into effect.

In 2006, in the second round against the Phoenix Suns they were up 3 with 4 seconds to go in overtime of game 5. The series was tied 2-2 and they looked set to go up to 3-2 on the road and positioned to advance at home if they could just play 4 seconds of defense. Yeah that didn’t happen. Raja Bell sunk a corner 3 in those 4 seconds, sending the game into a second OT where the Suns would eventually take the game. Riding the momentum of that victory they would later take the series.

The entirety of their existence the Clips have been fraught with terrible circumstance. We could go through their entire history starting with Bill Walton’s injury ridden tenure up to today but let’s just do this past decade.

In 2009 the best thing ever in the history of the team happened. They landed the #1 pick and drafted Blake Griffin. With his drafting there was actually some hype and excitement surrounding the team. After an encouraging Pre-Season, true to Clippers form, Blake busts his knee on a monster dunk and is out for the year.

After sitting out a year Blake returned with a frenzy. Having a marvelous Rookie of the Year season of the ages. Even if they were not going to win a lot of games they at the very least were going to be fun to watch. They traded for perennial All-Star Chris Paul the following year, and the Golden Age of Clippers basketball began.

They still never made it out of the second round but it was still the most success over a prolonged period of time they ever had by far. For the better part of a decade the Lob City Crew were seen as contenders.

Seeming like a contender and actually being one are two different things. It has now come to light that the presence of Chris Paul fractured the locker room from the beginning. Blake saw the team as his, but it was CP who was the one leading them to W’s. Winning cured these ills for a time, but as Doc continued to make bad roster moves over the years, the team’s chemistry faded. What was once a team of buddies who genuinely liked playing together shifted into a group of dudes who played joylessly, and as if they could not stand one another.

During the height of the success of the Lob City era the Clips saw their share of proof of the Curse. After overcoming the distraction of the Donald Sterling debacle, they were able to defeat the much hated Warriors in a hard fought 7 game series. In game 5 of the second round on the road in Oklahoma City they had a lead only to see it dissipate into nothing due to some terrible calls ( I will never forgive nor forget Tony Brothers!) and some bad turnovers on Chris Paul’s part. There they were again set to win a game 5 and go up 3 games to 2 on the road, seemingly positioned to close out the series at home, only to once again see it fall apart. They blow game 5 go down 3 games to 2, then end the season on a whimper in LA.

It only got worse from there. After a Chris Paul buzzer beater saw to the defeat of their longtime rival- the juggernaut San Antonio Spurs the following year, the team seemed to act like since getting over that hump, they could beat anybody going forward. It even seemed so all the way up to another Game 5 of the semi’s. This time against the Houston Rockets.

They were up 3-1 in the series and seemed a sure thing to finally getting to the promised land. If they could close out the Rockets they were set to play a Warriors team without their MVP Steph Curry. They had a 19 point lead in the fourth quarter in a close out game only to see the Rockets come all the way back with their superstar James Harden sitting on the bench. When historically terrible shooters from deep, Josh Smith and Corey Brewer, are making multiple 3 pointers on you, it is not just bad defense on your part but the Basketball gods telling you they are not having it.

You can blame Doc for some bad coaching ( he should have called timeout and subbed in Chris Paul for Spencer Hawes at the first sign of trouble, but instead allowed the Rockets to get hot) but when it came down to it, the team choked. They could not recover from that embarrassment and so after losing that game they lost the next 2 following it.

What animal do I need to ritual sacrifice for this to end?!

Teams never come back after being down 3-1. Many were surprised, Clippers fans weren’t. I know I wasn’t. I was no less disappointed tho.

The next year in the playoffs both Blake and CP go down with injury against the Blazers dashing all hope for that year. The year after that in 2017 they have a lead with less than 10 seconds to go in game 1 against the Jazz but once lose once again. All thanks to a buzzer beater by Joe Johnson. Every Clippers fan in those closing seconds was shouting “DO NOT LET JOE JOHNSON TOUCH THE BALL!”, but of course he got it, and he did what he always does- make clutch shots. That game proved to be the difference in what would turn out to be a 7 game series.

After that the team got blown up altogether.

That brings us pretty much up to today. After some miraculous luck the Clippers were finally riding as high as they ever had been, only to once again have the rug pulled out from under them. This time due to something completely out of their control.This season has seen the glimmer of the highest of highs in the distance only for them to drop into a well of the lowest of lows with no bottom in sight. No injury to a star player, no bad officiating, just the whole damn season coming to an early abrupt end.

All I can say now is this season better end up continuing if there is any chance in hell in finally breaking the curse. As a basketball fan I have hope, but as a Clippers fan I just have a gut-feeling I will once again be shouting to the sky “Basketball gods why have you forsaken me!!“.