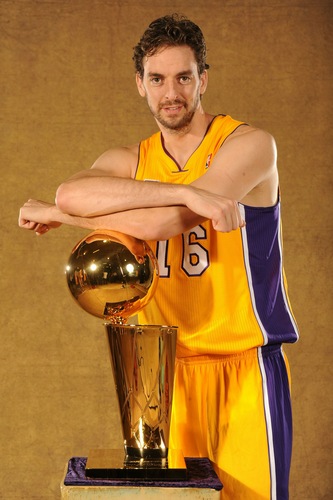 It was a glorious day in Los Angeles, the sky was blue, and the sun was shining especially bright in Laker-land the day Memphis’s GM Jerry West brokered a trade to send Pau Gasol to join the Lakers in exchange for the rights to his brother Marc Gasol, who would become an excellent player down the line.  West, the former Lakers GM and player who had famously traded for Kobe on draft day back in 1996, was quietly accused of sabotaging Memphis.  However, the trade worked out for both teams.  The Grizzlies got several productive years out of a younger and stronger Marc, while Kobe got a willing passer and a premier second fiddle in Pau.

Gasol was often pushed by Kobe.  Gasol, often labeled soft because of his inability to box out during a center-heavy era, pushed aside these concerns with alert passing and an elbow jumper that never seemed to miss. Calling Gasol soft might have been a bit silly, considering he averaged over 10 rebounds in three of his six years with the Lakers. In fact, just when you thought Kobe was infuriated with him, Kobe admitted very audibly to the press, “Pau, is a bad boy.”

To gain a top 5 player’s respect on the court is no easy feat.

We miss Pau.  We miss his graceful interviews. We miss stories about his love of the arts.  Occasionally, he would slip out of team events for a casual night at the opera.  We also miss Championships.  Thanks for a great run Mr. Gasol.  And cheers to your eventual induction into the Hall of Fame.