Game Three of the Battle of LA Goes to the Lakers 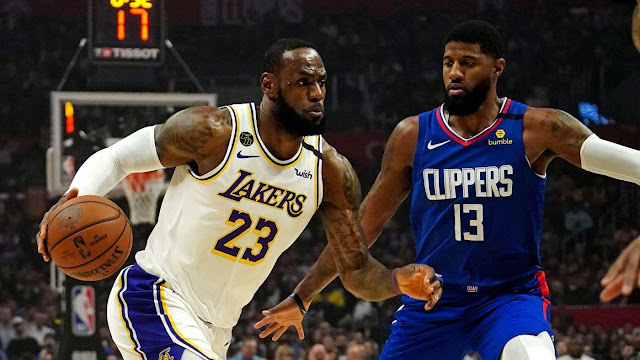 The Lakers had a surprising offensive contribution while the Clippers wilted at home.

It would be hard for even the most die-hard Lakers fan to admit that the Clippers weren’t winning most battles before their third game of the 2019-20 regular season. It all started when Kawhi Leonard picked them over the Lakers. Then came game one of the regular season, followed by game 31 for the Lakers; both of which went to the Clippers. There was a lot of noise coming out of Los Angeles for both teams during the trade deadline, but only the Clippers made a move. Finally, as teams around the Association began to waive or release players it was the Clippers who made a splash signing Reggie Jackson.

The Lakers had the better record going into round three, but the Clippers were the ones winning.

This fact wasn’t lost on the Lakers and their fans. Both knew the importance of this game. A third loss to the Clippers would turn up the volume on the Lakers not being as good as their hallway neighbors. Another loss and it would ensure the proud Lakers team a losing season against one team in the Association. This close to the playoffs, a loss would have also given a team which they may very well meet in the second season great confidence against them.

Make no mistake, the Lakers needed this game.

To their credit, they went out and got it. This came after a resounding victory against the team in the Association with the best record, the Bucks. It was a good weekend to be a Lakers fan! The victory puts the Lakers at 49-13 for the season and in control of the top seed in the Western Conference. It also gives us a glimpse as to what kind of team they are.

Obviously, this team begins and ends with LeBron James and Anthony Davis. Their pairing is one of the best in the Association this season, one could argue the very best, and possibly one of the best in an NBA season ever. They are that good. But, as good as the King and the Brow have been, they need more to have a realistic chance at raising the Larry OB at seasons end. They need a consistent third scorer.

So far this season, that has been Kyle Kuzma. Kuzma is averaging 12.5 ppg this season. Not great, but not horrible; also not enough to classify him as the third offensive threat on this team. Worse, Kuz has been woefully inconsistent. So, how have the Lakers fared so well in 2019-20 without that consistent third option we all think they needed? They tend to dominate by committee.

It may surprise you to know that the Lakers have six players who are just one made shot away, per game, from averaging double digits. Avery Bradley, Danny Green, Dwight Howard, Rajon Rondo, JaVale McGee and Kentavious Caldwell-Pope are all averaging 7 ppg or higher. I rounded up a bit for McGee, but the point is that offensively this team has been thriving without a consistent third scorer because they have a flurry of them. On any given day one of these can be that scorer. Sometimes, they don’t need anyone else, LBJ and AD are enough. Against the very good teams, they will need someone to step up.

Against the Clippers that someone was Avery Bradley.

Bradley improved on his season average across ten statistical categories against the LAC. He was above his average in:

Of course, its his points total, 24 on an average of 8.6, that is getting the most attention. But, Bradley excelled in most every category. In fact, every Lakers player played at or above their statistical season averages with the exception of the centers, Dwight Howard and JaVale McGee. When the Lakers has this type of contribution they are very hard to beat.
Where the Lakers had two players who didn’t show up statistically, the Clippers only had two who did. This has been a bit of a down year for Paul George. Last season a game like this one would have been expected for PG when he finished third in MVP voting. This season however has been different and this game offered the LAC a glimmer of hope that the player they mortgaged their future for was returning to form. Montrezl Harrell, who is improving on a great season last season and is a favorite for Sixth Man of the Year, also played a bit above average statistically.
That’s it however. Every other player either played well (on-par with their season averages) – Kawhi Leonard for example, or played below their statistical average. Most glaring were the games Marcus Morris Sr. and Lou Williams played. Both players are key cogs in the Clippers attack and against the Lakers they combined to shoot 1 for 10 from three with only eight points. That just won’t get it done.
This season has been one where the Lakers have had to answer questions and pass tests. To start the season they heard about their easy strength of schedule and how hard December would be. They went 9-5 in December. They heard that they couldn’t win against good teams after a rough start against the Clippers and best teams in the East. So, this weekend they went 2-0 against the best team in the East and the second best team in the West.
Test = Passed.
Coach Doc Rivers gave the Lakers credit for essentially outplaying his team. But, the Clippers are taking solace in the fact that they didn’t play their best game. They are confident that if their team plays like they can then no one can beat them.
The immovable force against the unstoppable object.
If the basketball gods are paying attention then these will be the two teams playing in the Western Conference Finals. LA will never be the same!