As the memorials around Staples are taken down, we are left with no choice but to move on to our new normal

I have a friend who used to be the unofficial pastor for the Los Angeles Lakers. In that capacity he would often go in the Lakers locker-room after games to pray and offer encouragement to the players. I would go to games with him, but had to wait as he spent time with the team. While he was inside the inner sanctuary, I would be waiting just outside with player wives, girlfriends and others.

Today, my friend preaches at his own church in South Orange County. Yesterday, Sunday February 2nd, I had planned to go visit him. He and I share a strong connection with the Lakers and he, obviously, had a special bond with the team and several players. Then I heard that the memorabilia that has accumulated around Staples Center and LA Live was going down after the Super Bowl. I really wanted to go downtown to see what fans had built in memory of Kobe, Gigi  and the other victims of the tragic accident. I had a choice to make, church or Staples Center. 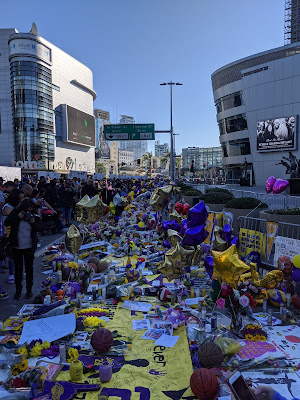 In a very real way, I was able to do both by visiting Staples Center.

I had expected people, but not a crowd. After-all, this was Super Bowl Sunday! I expected to feel emotion, but not overwhelmingly so. I expected to be touched, instead I was floored. “Wow” is all I could muster under my breath as I saw the display. I said it over and over again, “Wow. Wow. Wow”. I think what initially impacted me was the scope of the display. I had been to Staples and LA Live before many time and know what it looks like normally. To see it how it was, overcome with displays of admiration was, staggering.

What no doubt started as an impromptu display of flowers or a card quickly grew, then grew some more until now it just seemed to go on and on. There was a large white space put up that, I get the impression, most thought would be enough to satisfy the crowds.  This space was large, about 50 feet wide by seven feet high or so. After that large white space was filled with well wishes however, another was put up.

Some fans came to pay their respects couldn’t wait for the next board to be erected, so they left their love on the concrete floor. As I was walking around the display I heard someone say to look down, when I did, I was once again overwhelmed. It was as if each person had an overwhelming need to let the universe know what they thought of Kobe. What he meant to them. How the pain of a father and daughters passing impacted them. Not able to hold the emotion in while another white board was brought in, they dropped to the concrete floor and wrote. 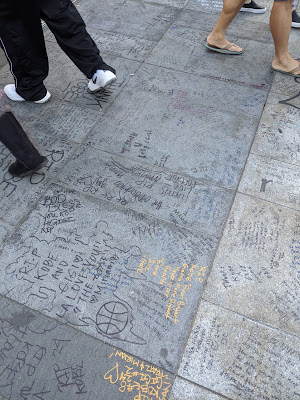 I was also struck by who I saw. Literally people from every conceivable walk of life was there. It was a testimony to who Kobe impacted. Since his passing we have seen acknowledgments and tributes from football players, entertainers, hockey players, futbol players, golfers, tennis players, college teams, youth teams, baseball players, etc. etc. Kobe’s impact reached well beyond basketball. He was a global superstar, yet somehow, he was so much more. His impact was evident and on display in the diversity of faces paying their respects that day.

Personally, I reflected on who I knew Kobe to be. It was when I pondered what he had ahead of him, what Gianna had ahead of her, that the sadness set in. Then, I had to reconcile that against the fact that Kobe was not perfect. People are flawed. The only perfect life ever lived was thousands of years ago and He was met with an early death. Kobe was not perfect. It’s hard for me to not consider the good he has done in his life. When people make mistakes we expect punishment, we expect rehabilitation. Everyone makes mistakes, maturity sets in when we stop repeating the same mistakes over and over again.

Stories are plentiful about visits Kobe made outside of the spotlight. In fact he granted more than 200 Make-A-Wish requests over his 20 years with the Lakers. He was a champion for women’s sports, not just basketball, but futbol and others. It’s hard to deny that he was making an effort to give back to community. One could argue that he wasn’t sufficiently punished for what he was accused of, but it’s hard to deny that he wasn’t, at the very least, on the rehabilitation path. He was working hard to give back and that has to count for something. 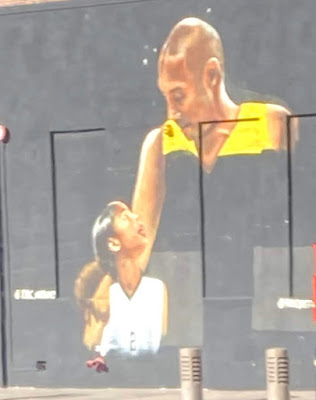 Everyone deserves a second chance. Kobe was making the most of his. Then, his story ended.

As I write this, I remain sad. Sad we will never see the completion of Kobe’s second act. Sad we wont read books he would have written. Sad we won’t see movies he would have produced. Sad the next generation of NBA hoopers won’t get the encouragement he was known to often text. I am beyond sad that Gigi won’t get her chance to dominate at UConn and the WNBA. Both their lives unfinished, like a mural near Staples. Beyond sad that a young mom has to move forward without her partner as she tried to make sense of this tragedy to herself and her daughters.

One of the most difficult things to do when dealing with a loss like this is to move on. We feel resentment that life keeps moving forward. It doesn’t seem right that games continue to be played, that bills continue to come due. Nothing about moving on seems at all far. However, life has to move on. It’s just what it does.

So, the games will continue, the bills will keep coming and we will all adjust. One thing that is evident to me however after my visit to Staples is that things won’t be exactly the same again. We will move to normal, but it will be a new normal. This tragedy left shock waves that will reverberate for months, even years to come. We will be OK, but we won’t be the same.

Please take time to read this amazing overview of the lives of each here. 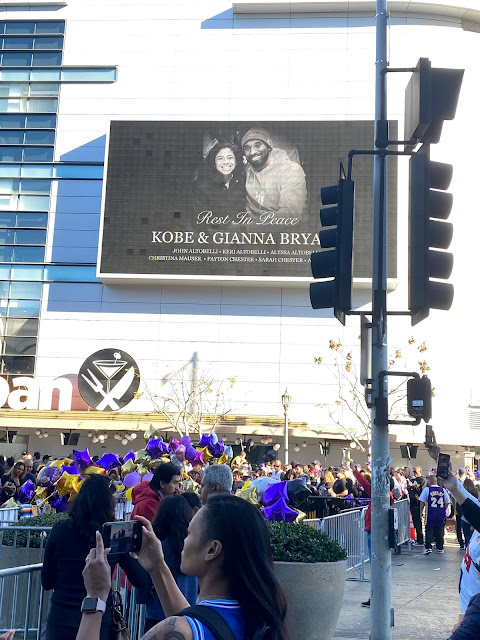 They are now part of our new normal.