Hero Ball Cost the Lakers a Chance at Victory 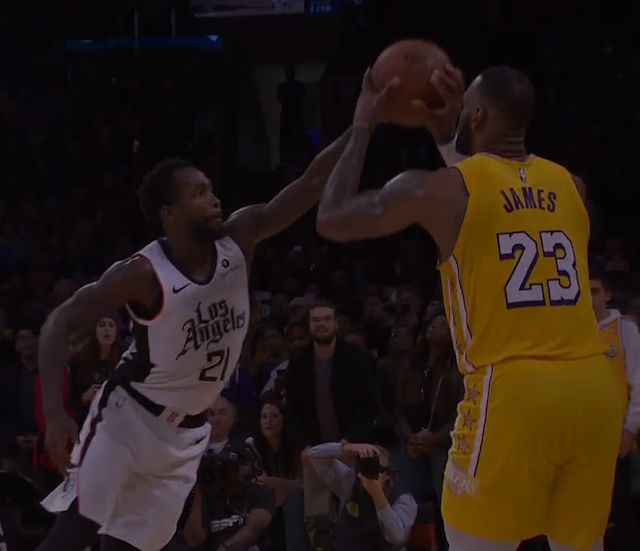 Lakers lose their fourth in a row, but it didn’t have to be that way!

LeBron James is the best player of our generation. On that, there is little debate. He is playing at an elite level at almost 35 years of age. He is the best player on one of the very best teams in the Association in 17th NBA season. Yet, he is as prone to mistakes as much as anyone.

Tonight, against the Los Angeles Clippers, he made a big one!

Before we dive into that however, lets talk about what a great game this was. This is exactly what us fans of Los Angeles professional basketball have envisioned. For decades the fictional “Battle of LA” was a silly one-sided affair in favor the Lakers. Over the last seven seasons, before this one, the pendulum had swung and the Clippers enjoyed success over their hallway rival. The 2019-20 season promised to be a season when both were elite teams with a legitimate opportunity to lift the Larry O’Brien trophy.

This game lived up to that hype and then some.

From the tip, you could tell this wouldn’t be a typical regular season game. The crowd was energized and both teams played with an intensity normally reserved for games in April through June. The Clippers, like they did in game one of the season against the Lakers, looked like the better team. But then, Kyle Kuzma checked in and decided he had seen enough.

Kuzma looked like the third scoring option the Lakers will need if they want to make noise in the playoffs, scoring 15 points in the first quarter. He did his damage by making 5 of 7 shots, 3 of 4 from deep, in only 5 and 1/2 minutes of action. With Kuzma leading the way the Lakers ended the first with a 33-31 lead.

Sometimes when a team comes back from a big deficit it all seems to come at once. A three, a steal, another three, etc. In this game, the Clippers seemed to sneak their way back into this game. It was a gradual comeback, but it worked just as well as a mad rush.

The final quarter started with both teams at 86. That is when things got interesting.

Earlier this season we got to watch two 2019-20 NBA Finals potential match-ups when the Clippers played the Celtics and Bucks and then when the Lakers matched up against the same team from Milwaukee. This game was a potential Western Conference Finals match-up. The fourth quarter had that type off feel to it.

Coming into this season some saw the Lakers as a make-shift team. The bulk of the team came together quickly after Leonard made this decision to sign with the Clippers. It was that seemingly haphazard construction of the team that left many shaking their heads. Doubters said things like, “This was a team that would have to learn how to play together.” Or, “This is a team what would take time to jell.” Even, “This was a team in need of a stern and patient hand to lead them as their coach.”

The Lakers seemed to take the nay-sayers doubts and used it as fuel. This team has jelled, they play together well, they defend well and their coach seems to have made all the right decisions in leading this team. This game however came down to one in game decision that cost the Lakers a chance to win this game.

With 41.9 seconds left LeBron James missed the second of two free throws. The score now held at 109-106 in favor of the visiting Clippers. The Clippers now had the ball, the lead, and time on their hands. A made shot on their next possession would essentially be a dagger.

That shot was taken by Lou Williams (who got into the game later than usual and had an uncharacteristic bad shooting night). The rebound went to Alex Caruso who did the right thing and got the ball into the hands of LBJ. James was hounded all night, primarily by Paul George. However, he came on strong in the final quarter scoring 11 points on 4 – 9 shooting. Additionally, he leads the Association in assists with 10.6 a game.

The ball was in the right hands for the Lakers.

Yet, inexplicably, LeBron seemed to make up his mind early into the possession that he was going to hold the ball for a final shot. Down three with 19.2 seconds a higher percentage play might be to drive to the hoop. Few players are willing to get in the way of a charging LeBron James. James, throughout his career, has proven to be a great finisher at the rim. Even if the Clippers would have managed to collapse, James is smart enough to kick the ball out to a teammate for an open shot.

Instead, LeBron held the ball. He seemed to do it with no sense of urgency, as if his mind was made up early on that he was going to take the final shot from distance and tie this game up. There is no denying that a made three in that situation would have energized the crowd and the team. But the percentages of making that shot are lower than, well, you know.

As James went up to take his hero three, Patrick Beverly got his hand on the ball and knocked out of bounds, off James. It went down as a block. Beverly, who describes his time working his way up to where he is in the game as his time in the mud. Beverly, the self named Mr 94-feet. The guy once drafted by the Lakers who bounced around European Leagues and the Association before finding a home in Los Angeles with the Clippers blocked the greatest player of our generation.

LeBron James has been a hero in more games than I can count. Few players have earned a shot at taking a last second hero shot, James is certainly one of them. In this game however, in that instance, the better option would have been to play team ball. The Lakers, to the surprise of many, are a really good team. In the last seconds of tonight’s game, James seemed to forget that and opted for hero over team.

It cost the Lakers their fourth loss in a row.