Los Angeles Lakers are Dominating the Association, Yet… 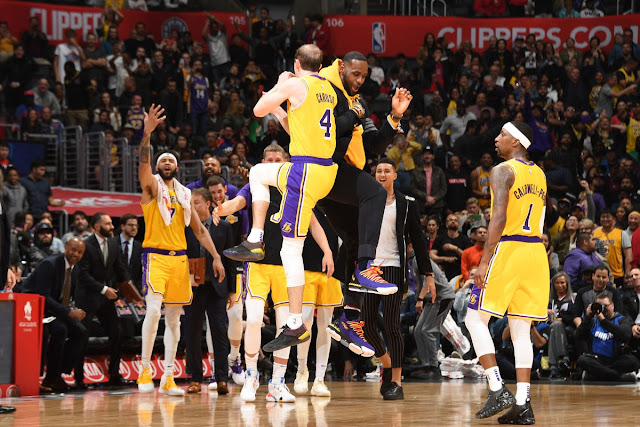 The Los Angeles Lakers are steam-rolling through the NBA regular season, which is a good and possibly bad thing.

Through 25 games, just over 30% of the season, the Lakers are 22-3. They have only lost two at home and an unbelievable single loss on the road. Oddly enough, that sole @ loss was at Staples Center to the Clippers. They have not lost two in a row and have winning streaks of seven, 10 and five. After the naysayers pointed out that their early season schedule was a bit…soft, the Lakers piled up wins Denver, Utah and Portland.

They currently sit on top of the strong Western Conference and share the best record in the NBA with the Milwaukee Bucks. Yet, while the Bucks are being touted as unstoppable, the response to the Lakers record is a bit more tepid. Before we get to that however, I wanted to “pop the hood” on the Lakers season to date. You see, they are not only dominating the Association from a wins-losses perspective, they are dominating statistically as well.

The Lakers are top five in the following categories:

That’s a total of 16 categories where the Lakers are, essentially, elite. Compare that to eight such categories for the Los Angeles Clippers. In fact, the most surprising category for the Lakers is Bench Net Rating, where they ranked second. Without looking, you may have guessed that the number one spot belongs to the Clippers and their vaunted bench. But no, the top spot belongs to the Dallas Mavericks. The Clippers rank 4th, two behind the Lakers.

That’s two spots behind the Lakers in BENCH NET RATING!

The above statistics tell a very nice story for the Lakers. They are sharing the ball (tops in assists), they are defending (top in blocks, tops in steals) and they are running (tops in fast break points). Even the lack of long range stats isn’t as it seems. It’s true that the Lakers aren’t in the top percentile when it comes to three point shots made, ranking 20th. However, they are just outside the top five in three point percentage. In short, they take less from distance than other teams, but they make just about as many.

All that to say, this team is good.

Not only good in that they are winning games, but good, seemingly, in every aspect of the game. So, why are people still doubting the Purple and Gold? Why are we still seeing articles entitled “The Lakers aren’t as Good as you Think.“

It’s easy for Lakers fans to chalk it up to haters hating. That is no doubt the case for some. However, there are some legitimate concerns.

While the Lakers bench has been a pleasant surprise, it’s no secret that Lakers fortunes rest on LBJ and AD. As they go, so go the Lakers. Playing them as many minutes as they have is a risk.

The Seattle Mariners won 72% of their baseball games in 2001. Their 116-46 record left them tied for the most wins in MLB history with the 1906 Chicago Cubs. The 116 wins was the most wins by an American League team. 59 of their wins were by four or more runs, which was also a record. They led the majors in runs scored and fewest runs allowed and won the American League West division.

Their regular season was dominant.

Then, the lost to the New York Yankees in the American League Championship Series. They didn’t even make it to the World Series. Today, the only time the 2001 Mariners are brought up outside of Seattle is as a cautionary tale. Regular season records are nice, but the end goal of every team playing every sport in every league is to win the last game of the season.

The Lakers are dominating the regular season to date. That’s nice, no doubt. But, dominating at the risk of making a legitimate run at their 17th NBA Championship is not a risk worth taking.