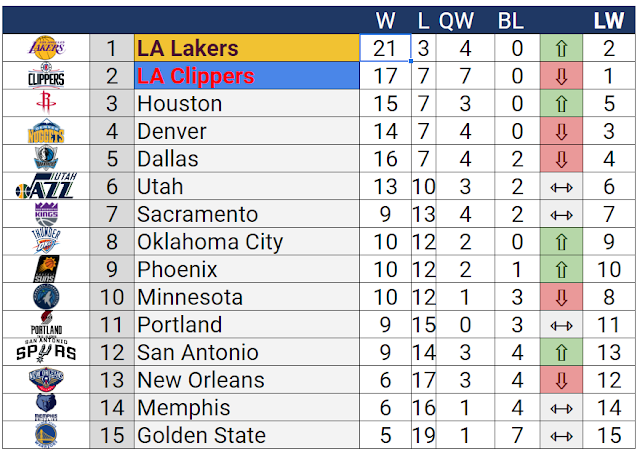 The NBA’s Western Conference is all about Los Angeles. Once again, but LA teams are at the top of the power rankings.

The Surprises
The Dallas Mavericks look to be the real deal. While Luka Doncic looks to have made the jump to super-stardom this season, Kristaps Porzingis is still figuring things out. Think of how good this team will be when he finally does!
The Portland Trailblazers are bad? This is a team that finished last seasons regular season with a 53-29 record and reached the Western Conference Finals. They return their core and added some nice pieces in the off season, yet, they are 9-15 and mired in the mud. Adding Carmelo Anthony seemed to give them a shot of adrenaline, but overall, this team looks lost.
If the Trailblazers are bad, how would you describe the Golden State Warriors? At least record-wise, they are horrendous! While it is not a surprise that this would be a challenging season for the Dubs, it is shocking to see them struggle this bad.

The real contenders
Albeit early, I think we can say that the teams with the greatest chance of making some real noise in the playoffs are the LA teams, Houston, Denver, Dallas and Utah. All the others, at this point in the season, are playing for a lower seed and early exit in the playoffs.

The cream of the crop
The NBA Western Conference belongs to Los Angeles. The Clippers and the Lakers are an interchangeable #1 seed.