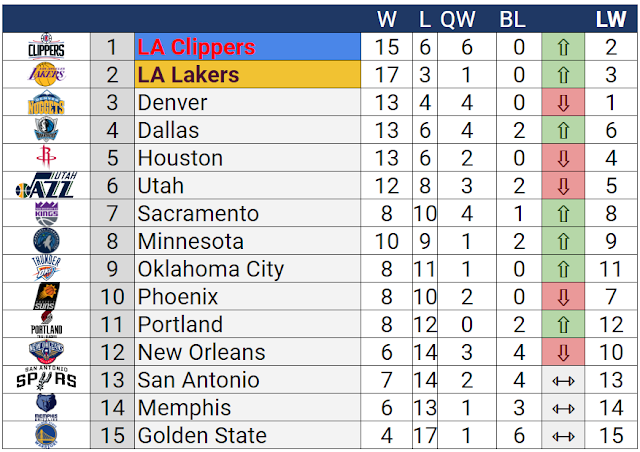 The NBA’s Western Conference is an all LA affair as both LA teams move up in week 6.

This week we will dive into the LA teams as we recap the Power Rankings. It makes sense considering they appear to be the cream of the NBA Western Conference crop. Oh, it also makes sense because our mission is to cover both LA teams. It’s a win-win for LAPB! 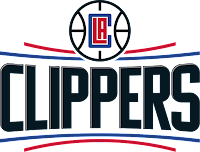 The Clippers are shaping up to be exactly who everyone thought they would be after the most eventful off-season in franchise history. They are deep, they are great defensively and starting to figure things out on the offensive end.

In short, they are scary.

While the Association has shifted, in a sense, from super teams to dynamic duos, the Clippers are the only team in the NBA with two dynamic duos. When you prepare a game-plan against the Clippers opposing coaches have to address what to do with Kawhi Leonard and Paul George. For most coaching staffs that alone is monumental task.

Against the Clippers, that amounts to only half the battle.

That is because after Leonard and George are sent to the bench they are replaced by Lou Williams and Montrezl Harrell. No team in the Association, currently or ever, has had such firepower off the bench. Through 21 games Williams is averaging 21.7 ppg and 6.3 apg while Harrell is contributing 18.8 ppg and 8 rpg.

One key ingredient in making something like this work is having a coach that can juggle the minutes and other players that understand their role. In Coach Doc Rivers the Clippers have someone who is respected by his players and the opposition alike. Having the right coach is no small task; the Clippers have the right coach. Getting buy in from the rest of the team however goes beyond just the coach. Everyone has to understand that the majority of the shots will go to Leonard, Harrell, Williams and George.

In fact, to date, 60% of all Clipper field goals came from one of those four.

That means that if you aren’t one of the Fantastic Four you have to make your shot when you have it and do the other things. Defend well, rebound, get steals, deflections, make the hustle plays. So far, it looks like every player on the team is willing to do their part this season with an eye towards great things ahead.

The Clippers are scary good.

All the more scary when you consider they are still figuring things out. They figured things out well enough to make it to the #1 spot in our Western Conference Power rankings this week.

While the Clippers are exactly who everyone thought they would be, the Lakers aren’t. They are better. Much, much better. After the Kawhi Leonard decision did not fall in their favor, they moved quickly to build a roster. It is obvious, in hindsight, the front office had a plan in place should Leonard sign elsewhere.

He did, and the Lakers were ready.

Many thought the moves were out of desperation, but now they look to be calculated moves made to build the best possible roster around their two All-Stars. In fact, to call LeBron James and Anthony Davis just All-Stars almost feels inadequate.

To date, they have been All-Everything for the Purple and Gold.

AD is in his prime and playing like a player ready to make that elusive leap from great player, to generational player. The type of player you can trust to make the right decision and hit the big shot. LeBron James has been doing that for 17 seasons.

In fact, the success the Lakers have enjoyed thus far is due more thanks to James’ play than Davis’. LBJ is showing Los Angeles that the player who returned from injury last season is not who he was. This guy, the one averaging 25.7 ppg, 7.2 rpb and 10.9 apg, the one leading his team to the Associations best record, the one who is the clear early favorite for MVP – that player is who LeBron James is!

Of course, it helps to have Anthony Davis and his 26.1 ppg, 9.3 rpg and almost 3 blocks per game on your team as well.

The Lakers steamrolled every opponent to start the season. A lot has been made of the Lakers hot start. While strength of schedule matters (it is at the heart of our ranking system) it is also true that you have to beat whoever is in front of you. The Lakers have done that through November.

The Lakers have built a winning environment which is going to serve them well as they head into a very tough part of their schedule. The chances they end 2019 with the Associations best record are slim. The chance they finish December with a .928 winning percentage like they had in November is unlikely.

Make no mistake however, the Lakers are back!

Whichever team you root for, its good to be a basketball fan in Los Angeles right now!