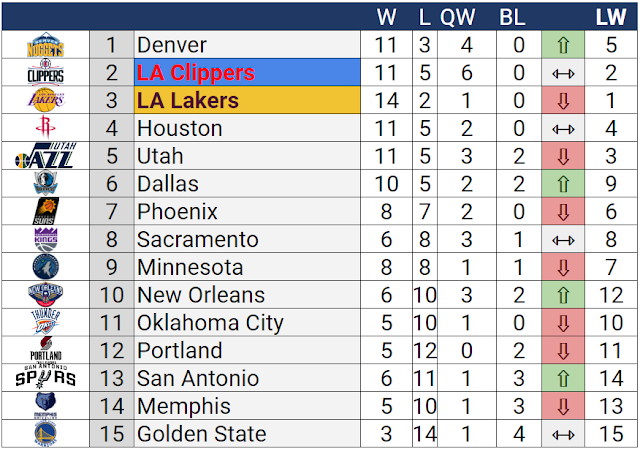 Week five is over in the 2019-20 season and it ends with some surprises, some shockers and some status quo.

First, a quick overview of our Power Ranking method. After seeing rankings based on peoples opinions I created this method that takes strength of schedule (SOS) into account. Adding SOS allows us to deduct points for a Bad Loss (BL) which is defined as a loss to a bad team on your home court and a Quality Win (QW) which is defined as a win against a quality team on their home court. The only subjective part of our ranking is which teams are quality, which are good and which are bad.
In an effort to make it more fair, the designation of a team can change from week to week. When I first started this ranking method three seasons ago I left the team status consistent throughout the season. Changing them makes more sense, especially when you consider the case of the Gold State Warriors. At the start of the season they were considered a quality team. They weren’t what they had been, but still had Draymond Green, All-Star D’Agelo Russell and Steph Curry so the quality status made sense.
Until it didn’t.
In week three they were demoted to good. This week, they were demoted again to bad. Tough fall from grace for the team that competed in the Finals a season ago.
A drop in status means nothing to the team to which the new status is assigned. It matters to teams that have played them. Beating a bad team (which the Warriors now are) nets you less points than beating a good or quality team (which the Warriors are no longer). Any team that has played them so far this season lost points due to their lowered status. Get it?
In short, our Power Rankings cover only the Western Conference and remove subjectivity from the equation. The Spurs don’t get points because they have been good for decades. They, like every other team, is ranked solely on their merits this season against the quality of their opponent! That seems imminently fair to me!
The Status Quo
The top five teams, Denver, LAL, LAC, Houston and Utah are all exactly where we thought they would be. No surprises there. Similarly, the Kings are right in the middle of the pack which is where we thought they would be, albeit, after a rough start. Memphis at the bottom of the pack is also not a surprise, they do have a great up-side though in that Ja Morant looks to be the real deal!
The Surprises
These are teams that are doing better than expected, so far. We all knew Luka Doncic was good, but I’m not sure many thought he would be this good this quick. Apparently, Vlade Divac of the Kings, a team that had an opportunity to draft Doncic, had no idea of Doncic’s potential. Luka (NBA player most in need of a great nickname) Doncic has the Mavericks playing and enjoyable, and winning brand of basketball.

KAT and the Minnesota Timberwolves are playing well, but not necessarily enjoyable basketball to watch. The Pelicans are doing a good job treading water until Zion Williamson makes his debut. The Thunder were primed for a down year, but are actually playing very well especially when you consider they are playing a somewhat mish-mashed unit. Then you have the Spurs.

They are the only team in this section that’s a surprise, in the bad way. The Warriors are bad because of injuries. The Spurs aren’t necessarily bad, but they are on the bubble between good/bad right now with the same team they had last season, for the most part. They may need to make some trades and declare a do-over at the trade deadline later this season.
The Shockers
These, I will take one by one.

The Portland Trail Blazers aren’t this bad. They can’t be. Yet, scoreboard does not lie. They are 5-12 and 0-4 since signing Carmelo Anthony. They have no QW’s and two BL’s. Nothing about this team looks positive, except for the fact that they are the same team that waved bye-bye to the OKC Thunder in last seasons playoffs.

I am not ready to write them off yet. But, I am close.

The Phoenix Suns are good? Much like the Trail Blazers, but in the opposite direction, I’m not sold on the Suns. But again, scoreboard does not lie. They are beating the teams they have to and sneaking in wins against teams they had seemingly had no business beating. It will be interesting to see where they are at year end, but for now, an 8-7 start to the season is a shocker!

The Warriors are bad. So bad.

The toughest thing about the ‘Dubs drop to the bottom of the Power Rankings is knowing that it is because of injuries. No matter where your fandom lies, you hate to see any team suffer through what the Warriors are now enduring. That being said, they, like the Spurs, will likely make some trades later this season and position themselves for a run back to greatness in the seasons to come. They know that they still have a big three in Curry, Thompson and Green and just need some good pieces around them.

If you hate the Warriors, enjoy this time, because you may not see if beyond this season.