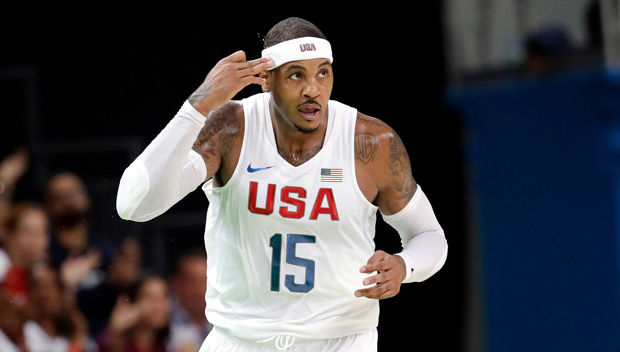 It’s been quite a ride for Carmelo Anthony. Next stop, Portland!

Carmelo Anthony moved from New York to West Baltimore at the age of eight.  With reported drug-dealing and violence just blocks from where he lived, there was something about Carmelo that shined, even when his city, and his family, faced the darkest of times.  Melo’s family members and figureheads in the community kept a close eye on a young Carmelo.  Melo once said, “Even people who (are) probably selling the most drugs in America, they wouldn’t let me go that route.”  Anthony then said, “I guess they saw something in me.”

Carmelo’s mother worked skin and bone, as a school-bus driver and cleaner, making $9.85 an hour sweeping floors at The University of Baltimore.  While she provided him with a hot plate, Carmelo and his buddies liked to make their own money, by squeegeeing cars at red lights, or buying sodas at normal prices and selling them for triple outside of Camden Yards before baseball games.

Carmelo has made over $260 million in salary alone, and was perhaps the best offensive player in a golden age of basketball when guys like T-Mac, AI, Vinsanity, KB8, and KG hit their collective offensive peaks.  Despite helping the USA Men’s Basketball Team to three Gold Medals, and leading the Syracuse Orange to a National Championship, Carmelo Anthony is not a success story, at least not in the game of basketball.

However we do have one more chapter to write.

Carmelo Anthony has undoubtedly had an excellent career, on the offensive end.  As a member of the Denver Nuggets, he led the league in scoring during his 2006-2007 campaign with 28.9 PPG.  In his time with the Nuggets, he was a durable player, rebounded at a decent clip, and of course was a high-volume scorer.  He was just so good at basketball and it just looked so effortless, that he hadn’t yet earned his reputation of being ball-dominant, and essentially a player that froze the game.  He was even able to successfully coexist with Allen Iverson.

When Melo joined the Knicks, the ball was poured into him, and he responded, but once again, only on the offensive end.  Sure, the rebounding was sort of there, and he even grabbed a career high 8.1 RPG in his 2013-2014 campaign.  However, that year was the first time Carmelo had ever missed the playoffs.  And at the conclusion of the season Knick’s management signed him to a questionable five-year mega-deal.   The following year Carmelo managed to play only 40 games, and the Knicks went 17-65 under the short-lived regime of puppet Derek Fisher and puppet master Phil Jackson.  In the two years that followed, Carmelo played his heart out, but did it the Carmelo-way: iso-heavy, defenseless, and playoff devoid.

Eventually Melo found his way onto the Thunder with stars PG13 and Russel Westbrook.  He averaged 16.2 PPG and served as a decent third fiddle, but his transition defense, and defense in general was so bad, that OKC coach Billy Donovan had to pull him from a playoff game.  And Melo’s next season featured a 10 game stint with The Houston Rockets, where he averaged only 13.4 PPG and was basically dismissed from the team.

It’s been more than a year since Melo has played professional basketball, and as of earlier this week, Melo was signed by The Portland Trailblazers to a non-guaranteed contract.  He will be making approximately $13,900 every day he remains on the roster.  And when he joins Portland on their six game road-trip, we will be rooting for him.  Sure the defense is going to suck, but maybe he can supply a formidable pick and pop presence off the bench for Damian, CJ, and crew.  The Blazers at 4-8, with a bevy of injuries, have nothing to lose.  And Carmelo, a 10-time all-star, a Manhattan-fixture, the kid from a project in Brooklyn, the native-son of Baltimore, and perhaps Team USA’s most efficient basketball player to date, has everything to lose, when all he wants to do is say a kind goodbye.