Jurrasic World? Not So Much 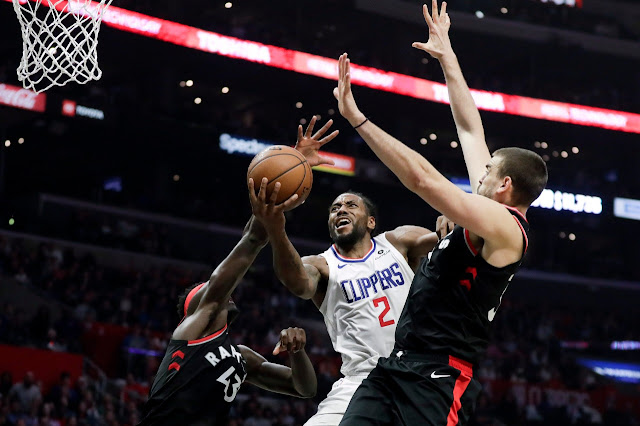 It wasn’t always pretty, but the Clippers still eek out a win against the defending Champions

Jurassic World? ……. Not So Much

We probably benefited from a tired team running out of gas in the fourth quarter but I will take this W all the same.

The Toronto Raptors rolled into Staples last night on the second night of back-to-back games against the two LA teams. After defeating the LeBrongeles Lakers the night before, they were feeling good after the opening tip off, holding the Clips to just 15 points in the first quarter.

To start the game the Clips struggled. They couldn’t make a shot to save their lives and had more turnovers than made field goals for most of the quarter. The Raptors despite being shorthanded, and losing their premier defensive player from last year (to us mind you),  still look like a stout defensive team. Their center, former Defensive Player of the Year Marc Gasol, did a terrific job clogging up the middle and forcing us to take shots from the outside where we were (other than Patrick Patterson a bit early) ice cold. They double teamed Kawhi aggressively the whole game and forced him into an uncharacteristic nine turnovers and two for 11 from the field. If it were not for the otherworldly scoring ability of Sweet Lou, the Clips may not have broken double digits in points in that horrendous first quarter. Thankfully we were not too bad on D ourselves holding the Raptors to just 23 points in the game.

The second quarter showed some improvement in that we found our footing offensively, doubling our points output from the first by scoring 36 points. We started to find our groove, actually with Kawhi sitting on the bench resting. It appeared Raptors head coach may have over-prepared in his gameplan for facing his former superstar player, because once he went out the Raptors’ defensive scheme seemed to fall apart. Toronto was doing a good job on Kawhi, Doc realized this and changed things up. He let the bench do their thing, and with the Raptors failing to slow down the Lou/Montrezz pick and roll, we were able to take the lead into half time.

Toronto came out with a fire after the half and had their best quarter of the game in the 3rd. Scoring 32 and holding us to 22. Kiwai was still struggling to score, but was doing better finding the open man out of the double team, finding Mo Harkless and JaMychal Green under the basket for some easy layups.They had the lead after 3, and with our superstar struggling from the field it was not looking good. To add injury to insult Landry Shamet went down with an ankle sprain and did not return. He needed help getting off the court and into the locker room, so it looks like he is going to miss some time. Even with Paul George set to make his return to the hardwood “really, really soon” it does not appear we will get to see the Clips with their full complement of players for some time yet.

The game was ultimately decided in the final stanza where we had the best defensive fourth quarter I have seen the team play in quite some time, holding the baby Dinosaurs to a lowly 10 points. We definitely benefited from them running out of gas late. The reigning champs had a built in excuse for it being tired and undermanned (being down Kyle Lowery and Serge Ibaka already and starting SF Anunoby getting hurt early in the game with a bad poke in the eye), but don’t tell that to the Clippers. To them this was a hard-fought victory to briefly relish before going on a two game road trip starting with Houston on Wednesday.

This was a game against the reigning world champions where we struggled from the get-go and were still able to gut out a win. A game where we had 19 turnovers as a team. A game with that many TO’s generally means you are not supposed to go home happy. If not for our dominance on the boards, where we out-rebounded them 66 to 38, that would have been the case. This win was an ugly one, best represented by Kawhi’s stat line where  he was one assist shy from a triple double, but was also one turnover shy of the bad kind of quadruple double. His “bad” night was balanced out with the opposition’s best player Pascal Siakam having an off night as well, scoring 16 points on 6 for 17 shooting.

In the end, the only stat that matters is not a number, but a letter.

Hopefully the team will learn what they can from last night because they are going to have to move on quickly here with back to back road games this Wednesday/Thursday. Nick Nurse and the rest of Jurassic Park will have to wait until December 11th to try and reign us into their Jurassic World.