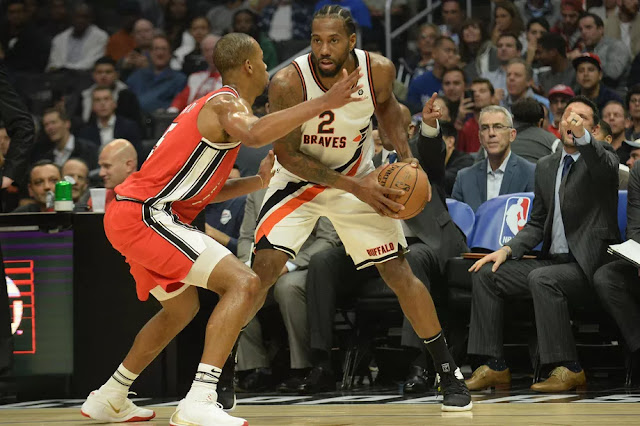 It wasn’t always pretty, but the Clippers did just enough to get their sixth win of the season

It looks like Portland will have to fight to make the playoffs. Despite a big game from 19-year-old Anfernee Simons (remember that name, the kid can ball) the talent behind Dame and CJ is slim.

Montrezl Harrel was a beast!
He did all the little things and cleaned up mistakes on both ends of the floor. The Clippers would have lost to a better team tonight, but Montrezl and their defense kept them in the game just long enough for Kawhi and Lou Will to take over in the 4th. Kawhi scored 18 of his 27 in the 4th and shook off any rust from his day off.

Get well soon PG-13
Watching this game I couldn’t help but get excited for the return of Paul George. This Clippers team plays hard, every damn night, and again Montrezl is a flat out beast on both ends. But the world is ready for the best version of this Clippers team and that is with a healthy PG patrolling the floor turning an already scary defense into an opposing team’s worst nightmare.

It’s fun to watch these Clippers scrap it out, then let Kawhi and Lou Will step on the other team’s throat to close it out. But Paul George turns them into something special and we basketball fans are ready to watch the Clippers at full strength.

Throwback Jerseys
The Clippers came out in the Buffalo Braves throwback jerseys and let me tell you something, they were magnificent. Just look at them. Those jerseys were better than the game tonight, I’ll just go ahead and say it.

The Zubac Game
Ivica Zubac finished the game with a quiet 15 points 13 rebounds in 20 minutes. I never understood why the Lakers were so quick to trade the talented young big and replace him with JaVale McGee. Zubac has a smooth game and is still getting better, look for him to continue to contribute.

The Claw Returns
Kawhi is back! After taking the night off against Milwaukee Kawhi was back and looking well… rusty. He struggled through the first three quarters in what was a pretty ugly game for both teams. But then in typical Kawhi fashion, he was unstoppable when his team needed him most.

Load Management
By my count load management was mentioned approximately 487 times. But seriously, a lot has been made about Kawhi sitting out a game early in the season. It’s not the best look for the NBA and some fans think they’re really mad about it but it’s clear teams value long term health over a regular-season game in November. Does it work? Absolutely! Toronto kept a close eye on Kawhi’s regular-season minutes and we saw how that turned out.

Landry Shamet
Shamet is already a key piece to this Clippers team. He continues to play great defense and make big shots. He’s not scared of big moments and will have a big role, even when Paul George comes back.