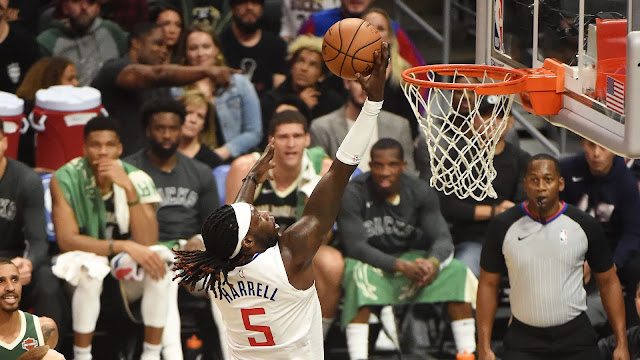 Clippers are game, but come up short against the Bucks

The Milwaukee Bucks are a favorite to win the 2019-20 NBA Championship. You would be hard-pressed to find anyone to disagree with that. Giannis Antetokounmpo is a special player with special skills who came one assist shy of an impressive triple-double. In addition they have All-Star Khris Middleton and solid veterans like Eric Bledsoe, Brook Lopez, Kyle Korver and others.

This is a very good team.

The Clippers without Kawhi Leonard or Paul George are just not in their class. Yes, this team made the playoffs in the much tougher West last season, but that was with Danilo Galinari and Shai Gilgeous-Alexander, who are both now in Oklahoma City. Gilgeous-Alexander, by the way, is showing what a great players he is this season in OKC. Without those solid NBA players the Clippers are good, but not the type of team that should compete with the Bucks.

These Clippers however, like last seasons iteration, don’t know how to not compete.

Doc Rivers continued a habit he said he would employ this season with a rotating starting line-up. In this game he started the best bench players in the Association, Montrezl Harrell and Lou Williams. Both proved that it doesn’t matter when they play, they will contribute regardless. Both Harrell and Williams had 34 points. For the Clippers to win this game they would have needed players to pick up the slack for Harrell and Williams off the bench.

The likely substitutes would of been JaMychal Green and Moe Harkless. They combined for 10 points in 48 minutes.

This game was evidence of just how deep the Clippers are. Even in a loss, they stood toe-to-toe with the possible Champion of the East with their bench players taking center stage. Good losses aren’t the type of thing most in sports subscribe to. A loss is a loss. But, its impossible to deny that sometimes you look good and still lose.

This was that kind of game for the Clippers.

Load Management
The controversy around this needs to die already. One of the greatest coaches in the NBA, Gregg Popovich, started this entire process when he famously was reprimanded by the NBA for resting Tim Duncan, Manu Ginobi, Tony Parker and even Danny Green in a game in 2012. He understood that in a very long NBA season it is wise to rest your players. No team has ever, or will ever, go 82-0. So, selectively picking and choosing “rest” games for the players who give you the best chance to go far in the playoffs is just wise.

Giannis is good
I mean hot take, I know. Obvious, I know. At times, he looked like LeBron, grabbing a rebound and moving up court with abandon. Other times, he looks like Magic Johnson, making passes to players I didn’t see as an option. He can rebound, he has handle and when Montrezl Harrell dared him to shoot from long range, he did and he made it. He is a special, special player.

Where is Terance Mann?
It’s going to be hard for T-Mann to get time because the Clippers are so stacked. But, Doc should make a point to find time for the rookie who looked so good in Summer League.

Foul to the face
Lou drives and makes contact with Eric Bledsoe (allegedly). Bledsoe reacts as if he was punched by Mike Tyson and an offensive foul is called. Doc challenges and the call is upheld on what was a basketball play with inadvertent contact. Later, Williams drives again and Mike Tysons George Hill who goes down in a heap and comes back with a welt near his eye. Obvious contact, no call.  First, there needs to be consistency and clear definitions of what is and isn’t a foul. Second, the challenge rule is pointless.

Doc Rivers said it best. “There was a flop, I think it [would’ve] been more of a chance that Bledsoe got a letter from the league about flopping than Bledsoe got fouled. That was awful. I don’t like the rule anyway. I said it up front. And now I like it even less.”

Jose has written for Bleacher Report, Clipperholics, OC Weekly and wrote a series of articles covering the 2010 NBA Finals for the LA Times. He lives in Southern California and is excited to watch thePeachBasket grow!