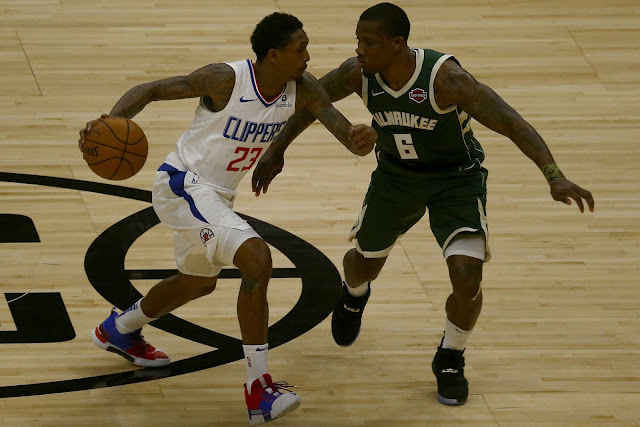 The Bucks and Clippers squared off last night in a battle of two of the NBA’s top contenders for the Championship this year. The Clippers entered the game with both Paul George out due to injury and Kawhi out due to load management. I expected the Bucks to dominate this game from the start because the Clippers were short-handed and had to face Giannis without a star to counter. From the opening tip, the Bucks jumped out to an early 9-0 lead behind the relentless attacking of the Greek Freak and a key 3 from point guard Eric Bledsoe.
The Clippers battled back to take a 22 to 21 lead as the quarter ended with both teams battling. Montrezl Harrell fueled the comeback muscling his way to the hoop and grabbing key rebounds. The Clipper’s defensive reputation was on full display as the clogged the driving lanes for Giannis and even when he did get to the hoop, he was met with resistance consistently.

The second quarter began with the Clippers leading 31-29 but the Bucks went on a 15-2 run behind two key 3’s from George Hill and Kyle Korver and Giannis get to the line. Bledsoe continued to stay hot from 3 as the Bucks went up by as much as 17 with 3 minutes left in the quarter. The Clips continued to fight back though behind Harrell and Lou Williams to close the deficit to 11 by half.

In the 3rd quarter, the Clips made their run battling back to within two points by mid-quarter as it seemed that Milwaukee lost focus. One thing that stood out to me is that even though Giannis has improved, I just don’t see them winning the title without another legitimate superstar to compliment him. If Kawhi or George had played in this game much less both of them, this game wouldn’t have been close.

The Bucks regrouped, however, and ended the 3rd quarter on a 7 pt run to lead after 3 by 9. Even with George Hill hitting 6 of 7 from 3, the Bucks were only up by 6 with 10 minutes left in the 4th. The Clippers showed inconsistent defense and had 16 turnovers. The fact that the Bucks were only able to muster 10 points off of those turnovers is telling. Big 3 from Patrick Beverly, part of his 20 points brought the Clippers back to within 4 with 9:43 left in the 3rd. Montrezl Harrell and Lou Williams were big tonight, as Harrell had 30 pts with 9 minutes left and Lou Williams had 28 as the Clips kept it close. Giannis pushed the lead to 12 with 5:37 left in the quarter, hitting his 4th 3 pointer. I don’t know if it’s me or what but I don’t see how the Bucks would be able to compete if they Clippers had their stars. You are not going to get 27 pts from George Hill consistently, and how many times do you expect Giannis to hit 4 3’s. Meanwhile, Lou Williams is going to score, Montrez is going to continue to consistently come up big.

Again the Clippers just would not go away, a big 3 by Shamet brought the lead down to 7 with 3:53 left. Patrick Beverly took a key charge that led to another big 3 by Landry Shamet to bring the lead to 4 with 2 minutes left. Bledsoe countered immediately with a drive to the hoop to push the lead to 6. On the next possession, Montrezl got to the stripe but was only able to knock one down. The Bucks then pushed the lead to 7 again with George Hill’s putback off a Bledsoe missed 10-footer with 1:20 left in the game. Immediately out of the time out, Lou Williams hit another big 3 to cut the lead to 4. Giannis came up big again in this game pulling down 15 boards, 9 assists and 37 pts to lead to the Bucks to a 128 -124 win. Lou Williams finished with 34pts, 10 ast and 6 rebounds, while Harrell dropped 34pts 13rbs and 5 asts.

Great game, very entertaining but I expect that when the Clips are fully loaded, this game will not be that close.