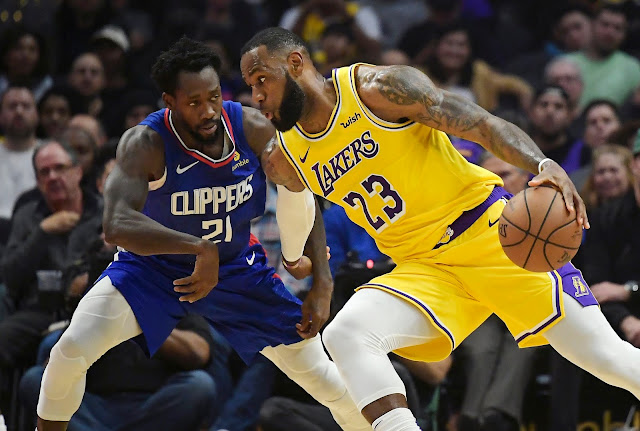 A Lakers fan honest assessment of his teams game one performance

Defense wins championships, so the old saying goes. It was apparent that the Clippers were on another level opening night, on both ends of the court. Kawhi Leonard did whatever he wanted in slow motion, he does not get rattled, he maintains his poise. Leonard has the fundamentals of Tim Duncan with a unique style like Kobe Bryant. He has mastered the Tim Duncan extended block turn around jumper, but he can also get a rebound and confidently push a “fast” break down the court. Kawhi made a believer out of this Lakers fan last night.

The Clippers are playing on a championship level.

The Lakers have only played one game and they are already in trouble. The Lakers have no bench, when LeBron was sitting down, the Lakers were stagnant, they have no playmakers. Like Bruce Lee said, “Be water my friends.” The Lakers could not flow without James on the court. Besides LBJ, none of the Lakers can dribble the basketball well enough to create their own shot. On LeBron’s championship winning teams, he had another dominant ball handler who could create their own shot without help, I’m talking about Dwyane Wade and Kyrie Irving. For example, Danny Green cannot dribble, he is a want-to-be Bruce Bowen and he filled that role temporarily for the Spurs and he is trying to do that with the Lakers. Green is catch and shoot, don’t ask or rely on that man to dribble because he cannot, that is not his game. On this Laker’s team, it is only LBJ who can create his shot. When LBJ is on the bench the Lakers are not very good, even with AD out there the Lakers might as well be the West Coast Pelicans.

James cannot win a Championship by himself. Yes, he is the teams best point guard, but the Lakers will lose most games if they rely on him to play point because they rely on him too much already to begin with to block, to steal, to rebound, to play defense. Now they want him to run around and play point all game? Even the best athlete on the planet will run out of gas. Besides LeBron, the Lakers have no point guard that is worth a damn. Injured Rondo is obviously not healthy, he looked like a malnourished Don Cheadle from the Avengers last night on the bench in a suit too big for his body. Pope played like poop. He looked like a scared JV player who just got thrown into a varsity game, but to be fair to Pope no one could handle the tenacious (Arkansas) defense of Patrick Beverly. The Lakers tried to put in another guy out at point briefly but he was a turnover waiting to happen. Lakers fans should start praying now because I’m telling you the Lakers are in trouble.

The Clippers just looked like an overall better team on both sides of the court. They play team defense and they all can shoot a free throw line extended, mid range jump shot when they are open. The Lakers cannot shoot, so LeBron is forced to do what he does best and that is play “Bully Ball” to plow into the paint for a contested off the backboard layup. The Lakers need someone else to score points consistently without needing LeBron’s help to drive and get all the defenders on him so he can pass the ball to the open man.

LBJ needs to rest sometime while he is still out on the court because when he goes to the bench, the Lakers turn into the West Coast Pelicans.