Round One of the Battle of LA Goes to the Clippers 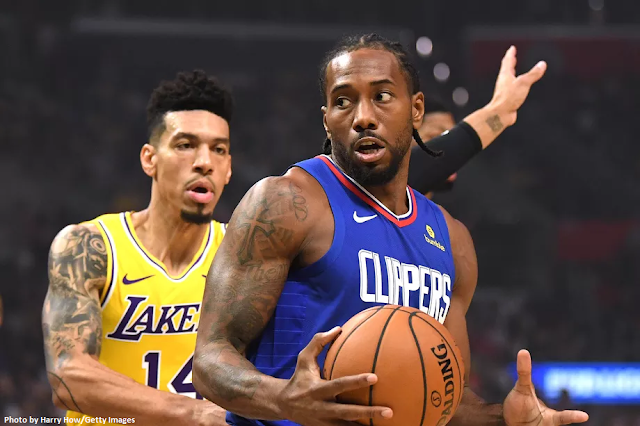 It was just game one, but it felt different. Welcome back NBA!

As a general rule, we shy away from game recaps here at LAPB. It’s no secret that recaps are everywhere and we prefer bringing you stories you can’t find anywhere else. But last night was special. It was, unique. It warranted a recap, of sorts.

Before I dive into what made game one of an 82 game season special, I want to take time to gloat a little. I know, it’s not particularly appropriate and I’m sure I’ll be wrong from time to time, but on this I was right.

We love predicting! Did this here, https://t.co/BknBvljG1j, but without the scores. So…

I mean, I almost got the score too. Clearly, I’m clairvoyant or something. Before you think it was a lucky guess, check out what I wrote on September 13th in an article entitled, “The Los Angeles Clippers Record After the First 10 Games – Take it to the Bank!”

The NBA is a sports league that understands they are in the entertainment business. They do a better job of giving the fans what they want than most of the others. Fans in Los Angeles, and basketball fans everywhere, want to see the Clippers play the Lakers.
They won’t have to wait long.
The battle for LA has never really been a battle. For decades, the Lakers were better. Over the last decade or so, the Clippers have had the upper hand. This is the first year in, well, ever, that both teams start the regular season with a chance to win it all. A legitimate chance. This season, the battle of LA means something.
Game one will be won by the Clippers. The Clippers have a better coach and are returning enough of their core to be in better shape as a team than the Lakers who moved a lot of players to bring in Anthony Davis. A basketball team is more than just collection of great players; it takes time for a team to become a team. The Lakers have great players, but having never played together it is going to take time for this team to be cohesive unit. The Clippers are just closer to that end state.
Clippers start 1-0.

Now, enough patting myself on the back and on to the off-center recap. First, I want to call out why I called this game special and unique. I admit it’s a bit of hyperbole, but hear me out. In the history of the Lakers v Clippers in NBA game ones we have had the following:

Magic Johnson ambush Kareem Abdul-Jabbar after Abdul-Jabbar hit a 15 foot skyhook from the free-throw line to win a meaningless game. That game marked the start of Showtime for the Lakers. It introduced the Association and the world to Earvin “Magic” Johnson.

38 years later, in what was billed as the possible second coming of Magic and Lakers Showtime, Patrick Beverly harassed rookie Lonzo Ball into a woeful game one.  That game ushered in the current era of grit and grind that personifies the Los Angeles Clippers. Call it the birth of Clamp City.

Certainly not nearly as significant as Showtime, but special in it’s own right.

That gets us to last night. Another game one of 82. Another chapter in the make-believe “Battle for LA”.  There was no doubt a lot of anticipation around this game thanks to the additions both squads made in the off-season, but at the end of the day, its game one of 82.

But, it felt different.

It felt special, it felt unique. Not because rookie Terrance Mann tackled Lou Williams after Williams made a three to win it. That didn’t happen. Patrick Beverly didn’t dominate the game after scoring only two points.

Ok, so that did happen. How many players can dominate a game when they aren’t scoring? It’s a rare trait and Beverly’s special talent as a unique player was on full display in game one. But, that wasn’t why it felt special and unique.

This game could mark the start of something for the Clippers. They played like they did last season, as a team. The reason I picked them over the Lakers in game one was simply because they are further along as… a team. The Lakers will get there, but they aren’t there yet. Both LeBron James and Anthony Davis admitted as much after the game.

The Clippers just have a head start.

What makes it all even more incredible is that this team still has one piece missing. That player is a six-time NBA All-Star, five-time All-NBA Team selection, four-time member of the NBA All-Defensive Team and last season leader in steals. So, ya.

The 2019-20 season could indeed be very special for the Los Angeles Clippers and game one that possibility was in full display.

As for the game recap. The Lakers started strong, Lakers fans were vocal on Twitter…until early into the second quarter. Then, the Clippers team took over. Kawhi Leonard, Lou Williams, Patrick Beverly, Montrezl Harrell, Danny Green and Anthony Davis were great. LeBron James almost had a triple-double, but couldn’t leave his imprint on this game. In short, (which is kinda the purpose of a recap – right) the Lakers showed what the can be in the first quarter, the Clippers showed what they are in quarters two through four.