What the Kyle Kuzma Injury Means to the Los Angeles Lakers 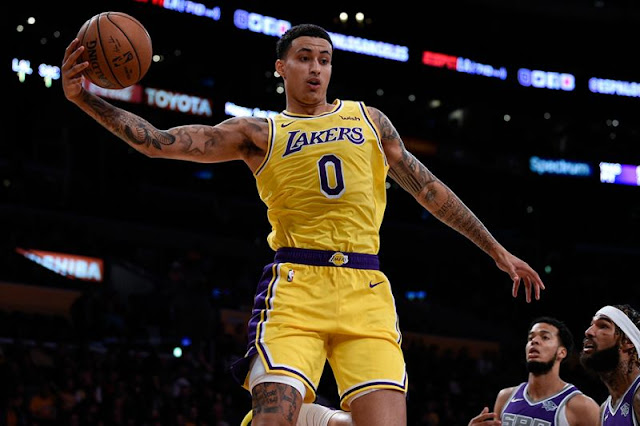 Entering his third, and much anticipated NBA season, Kyle Kuzma suffers an injury that will limit his participation in the pre-season, at least.

Before we get into details, lets start by sharing what we know. At least, what we are being told.

Injury: Stress reaction in his foot
Timeline: Out indefinitely
Occurred: Playing with Team USA in the Summer
Sure to miss: First three weeks of training camp

None of that looks promising. The first thing that caught my eye was the term stress reaction. I’ve heard of stress fractures, but what’s a stress reaction? I found my answer here.

Well, that just makes things worse. A stress fracture starts as a stress reaction. The article I pulled this information from goes on to say that when you have a stress reaction the best way to heal is to not run.  That’s a big part of what Kuzma does for a living.  In short, it looks like Kuzma’s bone is swelling as a warning sign of sorts to a possible fracture.

Considering that diagnosis it makes sense that he would be out indefinitely. This injury heals as the body rests. It’s just not possible to put a timeline on it.

Missing the first three weeks of training camp, in fact, would be the best case scenario. But, what would that mean for Kuzma and the Lakers? This is a team that returns only six players from last season and Kuzma is one of them. Team chemistry is a funny thing. It doesn’t mean that players on the team like each other. Some teams, some Lakers teams in fact, famously didn’t get along. No, chemistry means you know what the other player does on the court. It doesn’t matter what he does off it.

Kareem Abdul-Jabbar would rave about Magic Johnson’s ability to get him the ball where he wanted it. Michael Jordan trusted Steve Kerr enough to get him the ball in the best position for him to succeed. Team chemistry isn’t about liking each other, its about knowing each other on the court. That can only come with time playing together. Any time missed for Kuzma with what is, for all intents and purposes, a new team is a loss for the Lakers.

If the best case here is the Kuz misses the first three weeks of training came, what’s the worst case? I would rather not speculate, but I am confident you have already pictured that in your mind as you read this. While Kuzma wasn’t being counted on this season to be a featured player, those roles are taken by LeBron James and Anthony Davis, he was counted on to be a key contributor. This is a player entering his third season with career averages of 17.3 ppg 5.9 rpg and 2.2 apg. Those two year numbers are better than Kobe Bryants first two seasons in the Association.

I am not saying Kuzma compares to Bryant as a player, but it is telling to see how his numbers compare. This is a good player. A very good player. A player that the Lakers need going into the 2019-20 season to build continuity, to hit a big shot, to help ease the transition of some of the new players. No, Kuzma is not Kobe Bryant, but the Lakers need him this season in a different way but just as much as the Lakers needed Bryant in his final seasons.

The Lakers still have LBJ and AD, but make no mistake, they need Kuzma.

As mentioned earlier, the best case is he misses pre-season. Ideally, he comes back to help lead the Lakers to a fast start in the regular season. Based on this information they are due to get off to a 7-3 start. Let’s hope Kuzma is a part of that anticipated hot start.

The Lakers need him to be.