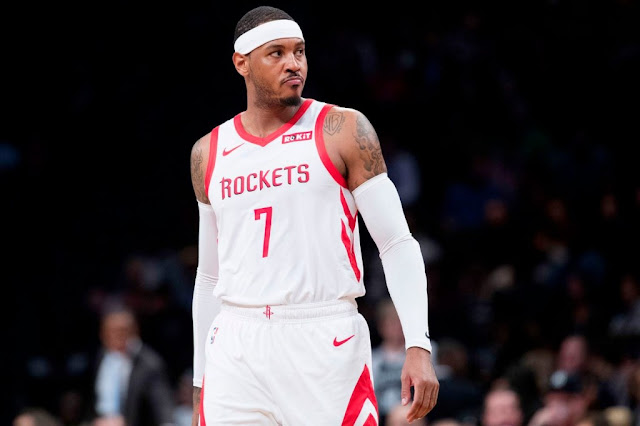 Carmelo Anthony has better offensive stats than Andre Iguodala and is the same age. Yet, Iggy is sought after and ‘Melo is ignored. Should either LA team consider adding him?

Carmelo Anthony is the most decorated American in International basketball history with three gold medals and a bronze. He won the NCAA Championship with Syracuse as a Freshman. He was the best player on a fun Nuggets team that made it to the Western Conference Finals. He is 10x All-Star, the 2012-13 Scoring champion, and the best Knick in the past 15 years. Those accolades make both these statements strange but true. Carmelo is a no-doubt Hall of Famer, and it’s not that surprising he has spent the last year and a half or so unemployed.

He’s always been a ball stopper, and his best shot is now antiquated, and analytically inefficient. His defense has always been lackluster and his rebounding has fallen off as he’s gotten older. But we’ve also seen Melo’s best basketball at the Olympics, playing with what is essentially an All-Star team. If somehow he could channel Olympic Melo, he could be a valuable asset to the two championship contenders in LA. But is it the Lakers or the Clippers that would be a better fit for Carmelo?

The Case for the Lakers: First, the obvious banana boat connection with LeBron. There has been talk of a LeBron, Melo pairing for years now. They’ve been connected since they were drafted and seem to be good friends off the court. From a basketball perspective Melo could fill a need as a spot-up shooter, and some scoring off the bench, two things the Lakers desperately need. Even if he could channel Olympic Melo for the Lakers, he does not solve their biggest problem. The Lakers need a guard who can handle the ball and defend opposing 1s and 2s not named Rajon Rondo (because he can’t shoot and might just be washed). While the Melo, LeBron reunion could be fun, Melo on the Lakers would amount to a net negative.

The Case for the Clippers: The Clippers have more depth than the Lakers, including the reigning Sixth Man of the Year. But other than Lou Will their bench scoring is blah. Melo could slot in nicely and provide some bench scoring along with Lou. They have the defensive depth so Melo wouldn’t hurt them too much on that end. I’m not saying Melo is the missing piece to a Championship, in fact, I think the Clippers win the chip with or without Melo, but he could be an asset if he’s willing to tweak his game. He should at least get a shot with a team if he’s willing to come off the bench. I don’t know about you, but it would be pretty cool to see Melo join his 2003 draft mates, LeBron, D-Wade, and Chris Bosh and win a ring.

Basketball fans have seen the infamous “Hoodie Melo” clips, getting his work in and showing off what has always been one of the more smooth offensive arsenals. If he can somehow combine his alter egos and create “Hoodie-Olympic Melo” he could return to the league and prove the doubters wrong. Or at least contribute to a contender and maybe get himself a ring.

Do it Clippers bring in Melo!!