The Key Difference Between Steve Ballmer and Whatshisname 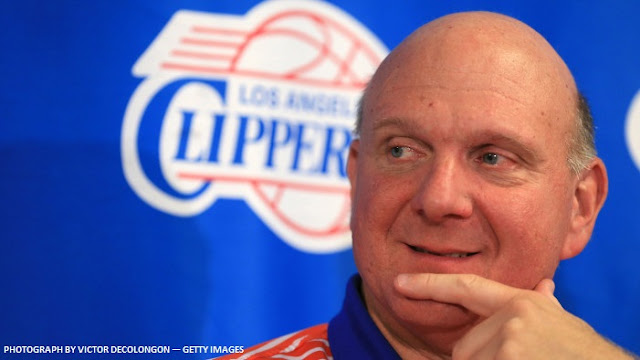 The Clippers have had five Chairmen since their inception in 1970. One was really bad while another is in the midst of doing something amazing.

Have you ever watched a show that started with the words “This program is for mature audiences only”? Whenever that happens to me I always say to myself, “Ha, I’m going to watch it anyway“. That should tell you something about the oddness that is me.

Well, this article comes with a warning, of sorts. Don’t worry, you won’t have to be particularly mature to read it. It’s not scary, sexual or contain any bad words. At least not the words most would traditionally refer to as “bad”.  It will broach a subject that is now officially Clippers taboo. A subject to heinous, so disgusting, so devoid of goodness that every Clippers fan from 1980 through to today avoids it at all costs.

That’s right. I will be discussing Donald Sterling.

I know, I’m sorry. Believe me when I say that I don’t want to bring him up anymore than you want to hear about him. With ESPN recently releasing their 30 for 30 podcast on Sterling however it seems a good a time as any. Look on the bright side though, I won’t be talking about the Clippers Curse. Although, you could make the argument that Sterling was the Clippers greatest curse.

Anyway, on we go.

Without going into a lot of detail, Sterling wanted a team and bought one. Sterling promised to “…spend unlimited sums” and purchased billboards that read “My Promise: I will make you proud of the Clippers“. It wasn’t long before his true colors became evident. Sterling seemed more interested in making and saving money than investing in a winning team. Of course, that wasn’t the worst of what Sterling subjected the Clippers players and fans too.

This article is not a rehash of the forgettable Clippers era under Sterling however. Those articles are plentiful and available in the podcast linked above. Instead, I want to focus on the difference between the current Clippers Chairman and Sterling. I imagine you might be thinking, “Ummmm, that’s stupid. Steve Ballmer is so much better than Sterling. He is the opposite of everything Sterling was. What a dumb idea for an article. Who pays you? Where can I file a complaint?“

Honestly, I don’t blame you for thinking all that, but please hear me out.

On the surface, this does seem like an odd idea to devote time to. It is obvious to everyone that Ballmer has made incredible strides in transforming the Clippers organization in his relatively short time leading them. He is engaged in every aspect from ticket sales to executive decisions. He appears to not only be liked by the players, but respected by them. In so many ways, he is everything Sterling was not. But just being different isn’t enough to transform a franchise.

Clippers fans who survived the Sterling era remember a team that was bad. Bad in every possible way on the basketball court. Laughably bad. Historically bad. Teams mired in that mud do not simply change and become winners. At best, a franchise at that level can hope for a sliver of hope. An odd quirk in the cosmos, a perfect alignment of the stars, a wild stroke of luck that sees them win a few games. In fact, the Clippers made the playoffs seven times with Sterling at the helm. That’s a playoff appearance percentage of 21%

Even a blind squirrel finds a nut every now and then.

The Clippers reached the playoffs under Sterling despite Sterling. They won because of “basketball reasons” that brought them Chris Paul. They did not win because there was a winning culture that permeated the franchise and started at the top. This was not a winning franchise, it was a franchise that won, sometimes.

Therein lies the key difference between these two Chairmen.

Sterling has made a point to transform the franchise. His quest is to provide fans, players and employees with a quality experience. It starts at the top, but the message has to be accepted. It has to resonate. So far, it has resonated. Clippers employees have bought in and are happy. Clippers fans are no longer scared to admit they are, in fact, fans of the LAC! Finally, and most telling because they are the hardest demographic to get buy-in from, NBA players are taking note. Just ask Kawhi Leonard and Paul George.

The proof is in the pudding though. Under Ballmer the Clippers have made the playoffs four times. “Wait, what? That’s less than Sterling. Your whole premise is off. You are the worst writer ever! I can’t believe you hooked me into reading this whole thing. OMG, I am so mad right now!!“, you might be thinking. Sterling has been chairman for five seasons to Sterling’s 33 so those 4 playoff appearances amount to a playoff appearance percentage of 80%.

Sterling’s teams were bad and won sometimes. Ballmer’s teams are, and will be, winners that experience the occasional down season. A fundamental chance in culture like that is rare. A foundational shift in the fortunes of a franchise are even more rare. For it all to happen over five seasons is honestly amazing.

A new normal that exists, in large part, thanks to the efforts of a fiery chairman who instilled a winning culture in a moribund franchise. The Clippers turnaround has been quick and historic. Most exciting for Clippers fans however is the fact that it’s not temporary.

It is the new normal!