Derek Fisher Set Me Up! 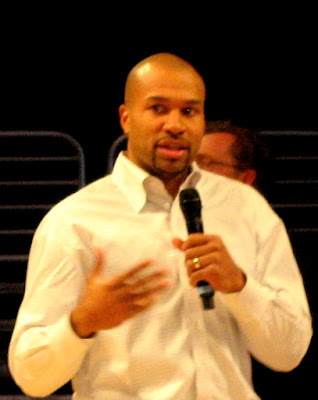 Derek Fisher is known to many as a great former Lakers player and more recently as the coach of the LA Sparks. Before that he left a lasting impression on a youth basketball camper, our own Kyle Graves.

It all started at the Wimp Sanderson Basketball Camp at The University of Arkansas at Little Rock (UALR) in the summer of 1995, a day that will forever live in infamy in my eyes. The Arkansas Razorbacks were in their prime, appearing in back to back National Championship games, which is great and all, but I am from Little Rock and my team was then and still is the UALR Trojans. The best player on that UALR team was a little point guard by the name of Derek Fisher, have you heard of him? Before he was the Head Coach of the Sparks, before he won all those rings with the Lakers and wetted up the Spurs with that game winning baseline fadder and before he lost all his hair. Back when he had a high top Bart Simpson, Kid N’ Play, House Party box fade, Derek Fisher was the star player of the Sunbelt Conference and the UALR Trojans.

As a ten year old in the summer of ’95 I was thrilled to see D-Fish as a player coach helping out with the Wimp Sanderson basketball camp. Now if you don’t know who Wimp Sanderson is just imagine the evil villain from Ghostbusters 2, you know that guy trapped in the painting? Just imagine that guy yelling at you on the baseline, he was terrifying, he still scares the piss out of me. I don’t know how he got the nickname Wimp. I asked him for his autograph once after a game during the season, I yelled, ” Hey Wimp!” and he turned around slowly  and stared at me, like that bad guy from Ghostbusters 2, I could see the river of slime in his eyes, I was so scared a turd popped out.
Sanderson was cut from the same cloth as Bobby Knight. During the regular season when I went to the games with my father, you could hear Wimp yelling at Derek Fisher and the other Trojan players over the band playing, he would grab players and yell in their faces, he would rip off his sports jacket and throw it on the ground and stomp on it or throw it in the face of one of his assistant coaches. The fire was always burning with Wimp and he lit a fire under Derek Fisher, and he put on a show at Barton Arena, playing lock down defense, diving for loose balls like one of the Bad Boy Detroit Pistons back in the late 1980’s. We did a lot of defensive drills during Wimp’s camp, and I’ll give him the credit for teaching me the fundamentals I needed to make my Jr and High School teams. With tight defense you can stand out from the crowd immediately at a basketball tryout.

Derek and Wimp  played a Good Cop, Bad Cop routine at the camp. Wimp scared the crap out of me and Derek was always nice, smiling and laughing with us. On the last day of the camp, we had an All-Star Day. Wimp was in charge of the Three Point Shootout competition and Derek Fisher was in charge of the Slam Dunk competition, on a seven foot goal. I chose to enter the Slam Dunk competition of course and the competition was fierce. Derek Fisher was like the And One All-Star’s, Rucker Park hype man, like we were with him and Shaq in the Master P music video, “Make Em Say Ugh!”. Derek was the sole judge in this Dunk Contest and I wanted the grand prize, a free Fruit Punch Gatorade. Mr. Fisher chose me the winner after I did an MJ “Rock The Cradle” dunk and handed me the Gatorade, and Gatorade never tasted so good as I let out a loud satisfying, “Ahhh” in front of all the losers.
This is when Derek Fisher Set Me UP.
He said something like, “Hey, do you watch the NBA Dunk Contest?” I was like, “Yea, every year.” ” Did you see J.R. Rider dunk between the legs? Can you dunk between the legs?” “I’ve never tried it, I’ll give it a try.”, I said. So I had everyone clear out and give me some room and I ran and jumped. I kicked my left leg out and then hammered myself in the nuts with the basketball and just fell to the ground, rolling around in agony as Derek and the rest of the contestants just laughed.
Thanks a lot Fish.