Kobe Said What? Part 1: Does it Matter He Said I? 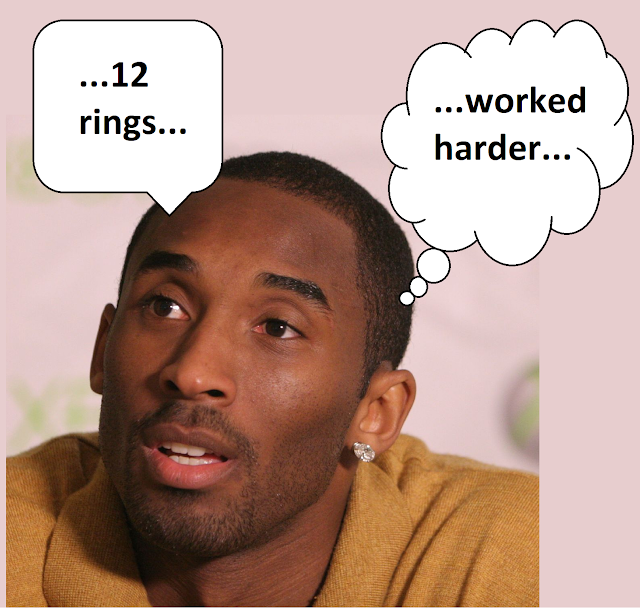 So, Kobe said some things. Were they justified? Where they realistic? Did they need to be said?

How can a text “sound” mean?

You know what I’m getting at. So when Kobe said recently that he would have had 12 rings if Shaquille O’Neal would have been in shape the correct thing for me to do is avoid the subject, right? I mean, it sounds like an egotistical thing to say. It sounds like a pretty specific disrespectful statement towards one of the greatest centers in the history of the Association. It sounds…bad.

But, who am I to apply a feeling to a statement. I mean, that’s wrong. I just finished up explaining why it’s wrong. I should walk away. I should let this go.

Kobe was talking about how things would be different for O’Neal if he would have worked harder. The topic was O’Neal. You can argue that O’Neal clearly worked hard enough to be a 15X NBA All-Star, 4x NBA Champion, 3x NBA Finals MVP, NBA most Valuable Player, etc. You could even argue that O’Neal was a grown man who did what he needed to do to excel at his choice of profession in a way that few before or since him have. Despite those strong arguments, Bryant has always carried a resentment towards O’Neal due to an impression that he didn’t work as hard as he should have.

Now, you could take this one of two ways. As a coach, you always want to see your players excel. You want to help guide them to a place where they could meet their full potential.You push your players, you encourage them, sometimes in a way that may come across as harsh. Your intent however is to see them improve. Your focus is them. Your passion towards them is selfless.

On the other hand a person might do the same things, but with different motivations. They push, they encourage in ways that come across as harsh, they even want the target of their impassioned encouragement to improve. The difference however is the focus. This person does all this in order to put themselves in a position to improve. Their focus is themselves. Their passion towards the other person is selfish.

Which person do you think Kobe is in this scenario?

When he was asked what would have happened if O’Neal worked harder Bryant’s reply started out all about his former teammate. He said O’Neal would have been the greatest of all time. He went on to share some of the aspects that attributed to O’Neal’s success. His mean demeanor, his competitive nature and more. But then he took a left turn and said “I wish he was in the gym. I would’ve had (expletive) 12 rings.”

Basketball is a team sport. Duh. You can’t win with one good player. The troublesome part of the equation however is that it’s also very rare for a team in the Association to win a Championship with 15 good players. The truth is you need a superstar. These are players that rise above the just good ones. There is no denying that Kobe was one of those players. So was Shaq.

In basketball, specifically in the Association, you have to develop this clearly defined pecking order. It has to be understood who the Alpha, the superstar, is. Everyone else is a supporting player. Some players have a hard time adjusting to that designation. Some teams have imploded because of it.

Maneuvering that landmine is a key component of being a successful NBA head coach.

Kobe saw himself as the alpha. Not an alpha, but the alpha. He no doubt respected and liked some of his teammates, but he was the teammate. Everyone else, including O’Neal, paled in comparison to who Bryant was. In Bryant’s mind.

I believe this sheds some light on Kobe’s use of the word “I”. It doesn’t excuse it, but it does help explain it. Does it matter he said “I”, ya, it matters.

After “I”, Kobe said the Lakers would have won 12 rings. That’s an interesting take. My knee-jerk was to assume Bryant was exaggerating a bit. But then I go back to the type of person Bryant seems to be. He is confident, talented, driven and not the type to lean on exaggeration. I think he really believed the Lakers would have won 12 rings if he and O’Neal stayed together (and of course if O’Neal worked “harder”). That aside, I thought it would be interesting to see if that was, in any way, possible.

Of course, to answer that question you have to make some assumptions. I am well aware of what happens when you assume, and yet, on I go.

Before digging too deep into the Lakers seasons without O’Neal, I want to take a closer look at the one Finals the duo lost. I think it’s applicable. Bryant never said they would have won 12 and lost none, so we will move forward with the understanding that the loss to the Pistons is in the history books and not part of the bold claim Bryant made. But that does beg the question, how did they lose to the “star-less” Pistons?

Upsets in the NBA playoffs are not under heard off. The 1986 Lakers had Kareem Abdul-Jabbar, Magic Johnson and James Worthy and still lost to the underdog Houston Rockets in the Western Conference Finals. The 1994 Denver Nuggets, an eight seed, beat the number 1 Dallas Mavericks in the first round. It happens. But, it rarely happens in the Finals. Yes, the underdog Raptors won the most recent Finals, but it’s impossible to ignore the Warriors injuries that, at the very least, contributed to that outcome.

So I ask again, how did the Pistons beat this star-studded team that was destined to win 12 Championships?

O’Neal averaged 26.6 points and 10.8 rebounds in that series while shooting 63% from the field. Bryant averaged 22.6 points while shooting 17% from 3-point range. He took almost five long range shots per game. Some have said the Lakers lost because of the injury to Karl Malone. Others have said it was the leadership of Chauncey Billups that led the Pistons over the Lakers. Some have said it was because of Kobe.

No one says the Lakers lost because of Shaq.

For our purposes we will just chalk up the 2004 loss as an aberration. We will assume Kobe meant the Lakers would have gone 12-1 in NBA Finals if he and Shaq stayed together and if Shaq worked harder. So, is a 12-1 Finals record realistic for Shaq and Kobe? In order to answer that I had to make some assumptions, as mentioned earlier, but it sure was fun to create this alternate universe where assumptions are rampant in order to answer this question.

Was 12-1 realistic? Don’t miss “Kobe Said What? Part II: 12 Rings” to find out. Remember to add us Twitter or Facebook in order to not miss it! I was pretty surprised at the results.