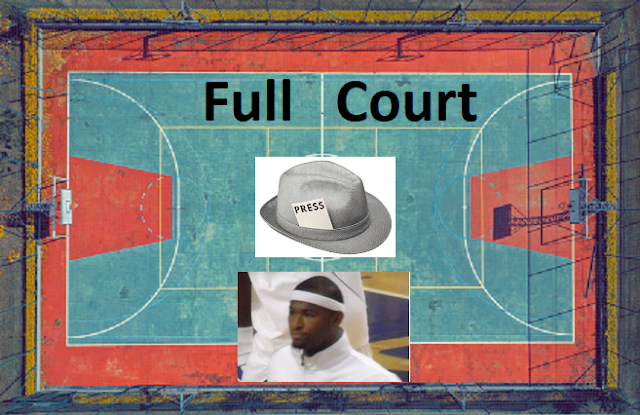 In a special edition of Full Court Press we take a look at what others are saying about DeMarcus Cousins after his devastating off-season injury.

It’s hard not to feel sorry for the guy. No matter what you may think of him as a player or person no one ever wants to see a season, or possibly a career, end on an injury. Also hard not to feel bad for the Lakers. While Danny Green was the key free agent the team added this off-season it was Cousins who had the most upside.

Imagine having the Cousins of 2017-18 who averaged 25 ppg and 13 rpg on the same court as LeBron James and Anthony Davis. The very thought of that tall and ridiculously talented group closing out games left Lakers Executives and fans alike salivating. It was possible. Cousins showed flashes of being that player at time with the Warriors last season. In fact, our very own Gianni Canazo called Cousins the Lakers X-Factor!

He was right. A healthy Cousins would have been the third star the Lakers don’t necessarily need, but would have loved to have.

This week we were going to post another Full Court Press article where we look at what everyone is saying about the Los Angeles Lakers and Clippers. Instead, we are going to dedicate a version of Full Court Press to DeMarcus Cousins. It’s safe to say he sad news of his injury is the predominant Lakers topic. So, what is the internet saying about Boogie?

The rules of Full Court Press are simple, we type in Los Angeles Lakers or Clippers and write about whatever comes up. Today, tje search is still for Los Angeles Lakers but we will call out just the articles related to Cousins, which is most of them.

This needs to stop now. No. Just, no.

We don’t always read the articles we write about, because we are professionals, but they don’t pay us for our time, so… But, this one I read. Thankfully, the author agreed that Carmelo Anthony was not the answer to replace Cousins.

2. Silver Screen and Roll – Kyle Kuzma does a little bit of everything for Team USA in win over Spain

While this article is not technically about Cousins it is about the player who would most likely get the majority of Cousins minutes. Kyle Kuzma was a pleasant surprise his rookie season. No one expected much of the 27th overall pick in the 2017 NBA draft. The pressure that season was on another rookie, Lonzo Ball.

Kuzma finished that season with averages of 16 ppg and 6 rpg while shooting 37% from three point range.

It’s no surprise that Ball is starting the 2019-20 season in New Orleans while Kuzma is still wearing Purple and Gold. Now it’s time for Kuzma, in this third season, to break out. While his points and shooting percentage both went up his second season his three point percentage dropped.

Kuzma is a slasher and one sure fire way to find a lane to the hoop is by shooting a good enough percentage from three that a defender has to respect that shot. If Kuzma can get back to 37% from long range while keeping all his other numbers about the same he would average over 20 ppg. Then, if he can improve defensively, where his Defense Win Shares of .087 put him at seventh on the Lakers last season, he could be the new X-Factor.

The Lakers still do not need a third star as they head in to the 2019-20 season, but again, they should would like one. Kuzma could be that star.

At least this makes more sense than Carmelo Anthony.

The odd thing about Dwight Howard is that he has not yet been bought out by the Memphis Grizzlies. Imagine you are the GM of the Grizzlies and you hear buzz about a player you have under contract. Don’t you at least consider the possibility of a trade to return some assets for that player instead of simply releasing him and getting nothing in return? Yes, that’s exactly what you do.

The Grizzlies also employ Andre Iguodala. They know Iggy is a very popular and sought after player and are understandably holding on to him to see what teams may be willing to give up in order to acquire him. Wouldn’t the Lakers, if there is solid interest in Howard, be better off playing it cool instead of tipping their hand via “sources”. Isn’t that at the root at what may have cost them Kawhi Leonard?

Howard is likely the best option available to offset the loss of Cousins. Howard’s Lakers history aside, he put up almost 13 ppg and 9 rpg last season and is a proven player in the league. All they may have to do to get him without losing anything is not act like they want him.

When I first heard about the injury my first thought was for Cousins. I mean, it’s been a rough few years for him. When he landed on the Warriors it seemed a Championship was a given, until it wasn’t. When he signed with the Lakers he was touted as the X-Factor and visions of a legitimate Big-Three danced in the heads of Lakers fans everywhere, until it didn’t.

Then my thoughts turned to the Lakers. It’s been a rough decade (almost) for them. When LeBron signed everyone assumed a playoff run was inevitable, until it wasn’t. Then when they gave up a lot to land Anthony Davis to pair with LeBron it seemed a Championship was a very real possibility for the Purple and Gold, until it wasn’t. Well, to be fair, that chapter has not yet been written, but losing Cousins no doubt hurts their chances.

Oh ya, and as the article mentions, there are not a lot of options available to replace him. Aside from Carmelo Anthony and Dwight Howard, who were already discussed here, there are others like Joakim Noah, Marcin Gortat and Kenneth Faried.

I mean, ya… no great options.