What if The Los Angeles Lakers Hadn’t Waited on Kawhi Leonard? 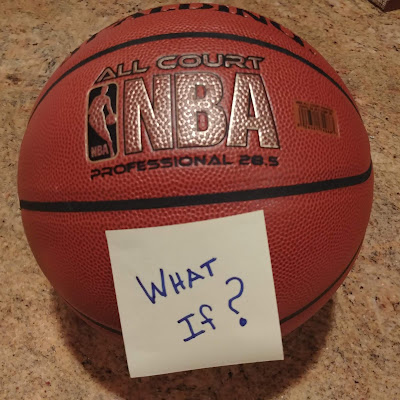 I write because I like to write. It helps when people read what I write and it helps even more when people comment on what I write. Another benefit that happens every now and then is when I learn something as I research an article. This is that type of article.

Hopefully you read it, enjoy it and comment on it; I would be grateful for all of it. An extra added benefit for me as I wrote this is that learned something, a few things actually, as I wrote it.

My intent in writing this was to build the team the Lakers would have had had they not waited on a Kawhi Leonard decision. The thought came to me as I watched Stephen A. Smith gently and just above a whisper explain how no one made the Lakers wait. He went on, barely audible, to explain how the Lakers made their decision and should live with the consequences.

I agree with Stephen A.

His argument centered around the fact that the Lakers already had two of the best players in the Association. He understood why they waited on Kawhi but he questioned the reason for doing so when they clearly didn’t have to. That got me to thinking, what if they hadn’t waited.

As I envisioned this article before I wrote it my mind went to a Los Angeles Lakers SUPER-TEAM. Not a SUPER-TEAM with three of the best players in the game but a SUPER-TEAM with two stars and plenty of very, very good players to support them. Visions of Bogdanovics, Russells and Jordans danced in my head. Until I sat down to do some research.

Then it all came crashing down .

The premise of this article was pretty straightforward. I would focus on improving on the players the Lakers signed immediately after the Leonard decision. The Clippers announced the Kawhi Leonard decision at about 10:54 pm on July 5th. Before that decision the Lakers had already signed a few players, namely Troy Daniels and Jared Dudley. After that decision however the Lakers moved quick to execute what must have been Plan B. They announced the signings of the following players:

That comes to $84.2 million committed to eight players or just a tick under $44 million for the 2019-20 season. That’s a lot of money for a lot of players. But, what if they hadn’t waited? Who was available that may have been an upgrade over the players they signed?

After building the above list and asking the above questions I set out to create a potential lineup for the Lakers as things stand now. I understand there is some discussion on who starts where, what the bench would look like, etc. This is by no means the list ( I doubt even Coach Vogel has that completed yet), but it is a list comprised of the players they have now.

After building that list the first revelation hit me. This team is a bit weak in the front court. LBJ and AD make up an amazing duo of starters, arguably the best in the Association. But backing them up you have Kyle Kuzma, Jared Dudley and DeMarcus Cousins. I am a big fan of Kuzma and wouldn’t be surprised to see him make a huge leap in the coming season, but he has averaged only six rebounds per game in his career. Dudley will provide great play, but only in spurts at this point of his career. He, like Kuzma, is not known for his rebounding averaging only 3.3 for his career. Which takes us to Cousins.

When they do a starting lineup that includes Jared Dudley for any stretch of time is simply not imposing. My guess is that the Lakers will look to shore up their front court as the season progresses.

Anyway, back to the question at hand, what if the Lakers hadn’t waited?

The next list I built to answer that question was a list of all the free agents that signed before Kawhi. It’s a long list that I will not include here. You know most of the names. Some were not coming to LA (think Kevin Durant) while some were not leaving their existing team (think Khris Middleton) but some were available should the Lakers have been inclined to pursue them.

We know the Lakers pursued D’Angelo Russell, so that seems like a great place to start. Russell signed with the Warriors for four years at $117 million. There is no way the Lakers would have paid that much or offered that long a deal, so in this scenario he is not an option. Regardless of the Kawhi decision, D’Lo was not destined to wear the Purple and Gold again.

Someone like Bojan Bogdanovic was available however. Signing Bogdanovic would have shored up the front court as say, a replacement for Dudley. Still not a rebounder, but a better shooter than Dudley and younger. The problem is that Bogdanovic signed for four years at $73 million. Not a bad salary but should the Lakers have matched it, it would have used up over 40% of their available funds.

That is when the second epiphany hit, this was a recurring theme for just about every option better than the one they ended up with! Danny Green is kinda the culprit (for lack of a better word). The Lakers gave Green $30 million over two years. That represented almost 35% of their available space. In other words, would the team have been better off with Green or Bogdanovic? Green or J.J. Redick (who signed for two years at $26.5 million). It keeps coming down to Green or [fill in the blank].

So, if you concede the above about Green then the issue becomes could the team of done better after the Kawhi decision and after signing Green. The balance of their signings after Green are a bit underwhelming, but they came cheap. Well, cheap-ish. The only possibility that makes sense would have been swapping McGee for DeAndre Jordan. Jordan signed for four years at $40 million. There is no way the Lakers would have offered him four years, but if they hadn’t been waiting on Kawhi they may have been able to convince him to play with LBJ and AD for two years at $10 million a year. Unlike the D’Angelo Russell possible signing we discounted earlier, the Lakers never inquired about Jordan (that we know of) so we simply don’t know if he would have been open to less time to play alongside LBJ and AD. Let’s assume he would have been open to the idea.

While that hypothetical signing may have made the club better, it would have come at a cost. Signing Jordan for $10 million over McGee for $4 million would have meant not signing KCP, or Avery Bradley or any combination of the others they signed amounting to $6 million a year.

So, what if the Lakers hadn’t waited on the Kawhi Leonard decision? Honestly, they wouldn’t be in a much better position than they are now. Kudus to the Lakers front office for pulling of a Plan B that, while not being as imposing as Plan A would have been, is just about as good as it could have been.

One other thing to consider. Did you notice that every signing the Lakers offered their free agents  was for two years (with the exception of Cousins who was offered one year)? The team is playing the long game with an eye towards the future. You see in two years we will be on the cusp of the 2021-22 NBA season. Prior to that will be the free agent period of 2021. Unless something changes between now and then that is when Giannis Antetokounmpo becomes an unrestricted free agent.

The Lakers may have swung and missed when they tried to build a big three unlike any other in Los Angeles. To their credit, they rebounded well in the present and are positioned to make a play for the reigning MVP in just a few years. A good front office makes decisions that maximize winning for their team now and into the future. The Lakers have done just that.

Kawhi or no Kawhi.