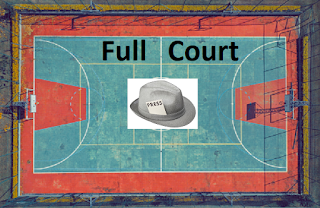 It’s true that things have slowed down since the wacky Free Agent season essentially completed. But, there are still people out there writing. This is what they are saying.

1. Clipperholics – LA Clippers: Examining the Team’s Three Biggest Risks in 2019-20
This is easily the best sports writing in the history of writing about sports. Since the very beginning, when a chisel was put to stone to document the latest gladiator match there has never been a more thorough and eloquent overview. It’s really that good.

Or, maybe it’s just because our Jose Salviati wrote this piece.

Either way, it’s worth a read. Jose exams the teams lack of backup PG, possible chemistry issues and lack of rim protection as things that might negatively impact the Clippers in the upcoming season. He also identifies the four seasons of an NBA fan. If that’s not clear, you should read the article!

2. Yahoo Sports – Trae Young, Montrezl Harrell face off and dominate in Drew League
Back when the Clippers were, well, less than good the words “Clippers Curse” followed them around. In short, anytime something bad happened to the team the dreaded curse was brought up. It’s understandable, given their recent success, that the words “Clippers Curse” have not been heard over the last few years. One remnant of the bad years that is curse-like however is the fact that the Clippers are thought of as a bit of an after-thought. Note that Harrell (A Clippers player) is mentioned in a story with Young (A Hawks players).

Ya, this is certainly nit-picky, but still a point worth mentioning. The spotlight is rarely just on the Clippers. It’s normally shared. That being said, Harrell was a beast. He scored 46 points which included multiple threes! Are you kidding me, Harrel is going to shoot and make threes in the 2019-20 season. If so, the Clippers are even more dangerous than we originally thought and we all thought they were already pretty dangerous!
3. CBS Sports – 2019 NBA offseason grades for every team: Lakers, Clippers, Pelicans emerge as big winners after free agency madness
Not sure how you leave the Nets out of the title here. It my be in the article, but I didn’t read it. Takes enough work just to write up these reviews! Anyway, the Pelicans are very interesting. They had a player who didn’t want to be there. They had no leverage when it came to moving him. In times past franchises like that lose. The Pelicans won. Not only did they get very good, young players in exchange for Anthony Davis they also got like a gazillion draft pics. Solid win for a team that was in no position to win.

Oh and ya both LA franchises did OK too, I guess.

4. ClutchPoints – Rich Paul opens up on Marcus Morris free agency situation with Clippers, Knicks, Spurs
This is essentially the Rich Paul explanation tour. Some have said he advised Marcus Morris to pass on a very good offer from the Clippers in part because it would make their team that much more potent. Paul you see is very good friends with LeBron James. James plays for the other team in LA. The assumption was that this move, which ended up being a bad one for Morris in hindsight, was made more with LBJ in mind than Morris. If true, then that’s a pretty bad look. Paul denies it.

Regardless, Morris left Klutch Sports Group and Rich Paul after this all happened. Check out the video and decide for yourselves how forthcoming Paul is.

5. Fade Away World – Jalen Rose: ‘The Clippers Will Never Eclipse The Lakers In Los Angeles’
The title here is misleading. Rose talks more about the short-term than the long-term in this snippet. As a general rule, it’s a good idea to rarely use the words EVER, ALWAYS or NEVER. So, will the Clippers eclipse the Lakers in LA someday, it’s possible. It will take decades of consistent success. It will take multiple championships. In short, it will take time. It’s silly to say it will never happen though.

As I mentioned however, this is more about the upcoming season. Rose doesn’t see Los Angeles, as a whole, getting behind the Clippers over the Lakers. In that regard, he is right. Lakers fans are resolute, steadfast and loyal. Don’t believe that? Read the last article.

6. ClutchPoints – Lakers fan heckles Clippers’ Kawhi Leonard at Pacquiao-Thurman fight in Las Vegas
Told you they were resolute, steadfast and loyal! They are also everywhere. Literally, everywhere! In this instance the Klaw was trying to enjoy the fight when someone shares their option that Leonard is the most overrated player in the history of professional sports. Hmmmmm. Leonard was the Finals MVP last season and…well, nevermind. No point in justifying this further. File this under “sour grapes” and “get used to it Kawhi”.