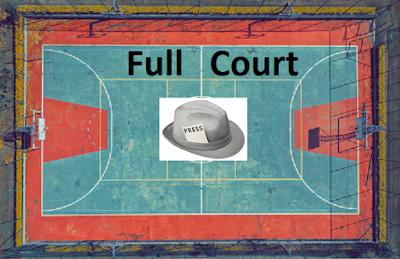 It’s true that things have slowed down since the wacky Free Agent season essentially completed. But, there are still people out there writing. This is what they are saying.

1. Lake Show Life – Los Angeles Lakers agree to deal with Jordan Caroline
Coming into the 2019 Free Agent period the Lakers had two plans. Plan A was to acquire superstars to pair with LeBron James. They were able to bring Anthony Davis into the fold, but failed on pairing those two with Kawhi Leonard. Plan B was to address the primary weakness in last seasons team, no shooters. After losing Leonard the team was able to pivot quickly and bring in Danny Green, Troy Daniels, and Quinn Cook all of whom boast a FG3% of over 40%. Jared Dudley comes in just under that at 39.2%.
Plan A – mostly achieved. Plan B – a solid win.
In signing Caroline the team is adding youth and depth. He was the Lakers leading scorer during Summer League averaging 16 points. More importantly, he did that in 20.8 minutes while taking only 8.5 shots. Any player on this Lakers team with AD, LBJ and Kuzma will have to be efficient because there will likely not be a lot of shots to go around.
2. CBS Sports – NBA free agency: Lakers, Raptors have complained about the way Clippers’ Kawhi Leonard handled his decision, report says
Ouch. On the surface, this looks like sour grapes. We will focus only on the Lakers here. After all, no one made the Lakers wait on Kawhi. They were free to pursue other stars. Instead, they did what any rational franchise would do and wait on the best player in the game to make a decision that may have included him picking them.

Nothing is anyone’s fault… Both parties were smart about business…. Kawhi did what he had to do, and so did we… We got who we wanted.

That tweet says it best. Another thought we had here as we considered this headline. Does anyone really think Kawhi was so “anti-Lakers” that he intentionally thwarted any attempt by them to improve their team? I have a hard time believing that. Leonard is a business man who made a business decision. Business is tough sometimes.

3. Clutch Points – Report: LA brings back Mike Penberthy as shooting coach
Remember how we mentioned earlier that the Lakers lacked shooters in the 2018-19 season and made acquiring shooters a priority? If so, doesn’t this hiring make sense? Even if you don’t recall us mentioning that, this hiring still makes sense!
Penberthy, a former Lakers players who was with the team in the 2000-01 season, held the same position with the New Orleans Pelicans and Minnesota Timberwolves. It’s clear that the franchises focus will be on shooting in the upcoming season. Now, if they could bring in a defensive guru. I know he has said he doesn’t want to be an assistant, but isn’t a call to Tom Thibodeau a good idea?
4. Bleacher Report – Anthony Davis Says He’d ‘Definitely Consider’ Playing for Bulls Later in Career
One of the very best things about being a Lakers fan is that you never worry. When the team is down, greatness is a season away. When a need is identified, the very best player will sign. Lakers fans are renowned for sporting the most rose covered glasses in the history of rose colored glasses.
There is no way AD doesn’t re-sign after the 2019-20 season. I mean, right?
I think the answer to that question depends on how well the team does and well the team jells. No one thought Dwight Howard would bolt, but Howard bolted. It’s possible Davis leaves, but its also possible the Lakers win it all and Davis signs a long-term contract to be the face of the franchise well into the future.
Seeing headlines like this have to give even the staunchest of Lakers fans pause though. With our without those rosy glasses.
5. Lake Show Life – Lakers Rumors: Anthony Davis to skip FIBA Basketball World Cup
Good! Playing for your country is an incredible honor and certainly something everyone with an opportunity to do, should do. Davis, in making this decision, is acknowledging the importance of his first season in Los Angeles. Having battled injuries it makes sense he preserve his body in preparation for the 82 games NBA season.
Gold medal decision Mr. Davis!
6. FiveThirtyEight – LeBron’s Team Looks Totally Different Now. But It’s A Lot More Like His Finals Teams.
This is an article worth reading. We are not suggesting that the others are not, simply that this one, well, is. It’s fair to say that a visit by the Lakers teams over the past few seasons have not exactly struck fear in the hearts of their opponents. The realization spelled out in this article might be enough to scare a few teams as we head to the 2019-20 season.
In short, the team the Lakers built for 2019-20 looks a lot more like the teams LBJ played with in the past. By “the past” we mean before the 2018-19 season when the Lakers, for reasons only they understand, bucked the odds and built LeBron a team unlike he had ever had. Not unsurprisingly, that team did what no LeBron team had ever done since the 2005-05 season, they failed to make the playoffs.
Its not easy to admit a mistake. In building this team the Lakers have done just that. The results are plain scary!