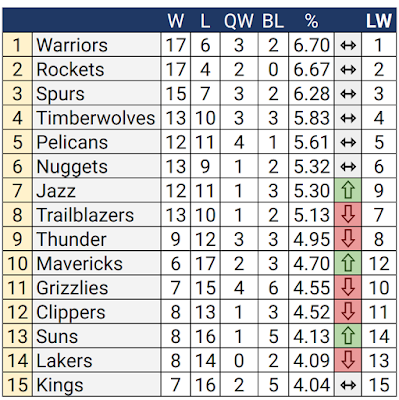 Houston is looking more and more like the team from Nor Cal in terms of their explosiveness and ability to defend. Today’s NBA is all about multi-tasking players who can shoot from distance and defend. The Rockets are built do do just that.

Can any team other than the Spurs continue to win without their alpha player over twenty plus games? The Pelicans are an aberration in terms of being built against the agreed on template (see paragraph above). Yet, they continue to win and lead the WC in Quality Wins.

The experiment in Oklahoma City was bound to have it’s ups and down. This week saw more downs than ups for the Thunder. The Thunder have nothing on the Clippers however who lost Blake Griffin for two months. As mentioned earlier, no team outside of San Antonio survives this type of loss. Combine that with the loss of Patrick Beverly, Milos Teodosic and Danilo Gallinari you are left with a team that might compete against G-League competition.

The Lakers are exciting their base of loyal fans. Lakers fans are great. I’m not talking about the ones you see on the screen during games, I’m talking about the ones who can’t necessarily afford section 100 or court side seats but will talk your ear off about his/her team. These are long suffering fans who love the Purple & Gold no matter what. No. Matter. What!

These fans are excited because they see something they haven’t seen from their team in years, promise and potential. This is the year however that the team needed to show improvement. At times they have. They play better defense than last season when they didn’t seem to play any at all. They are exciting to watch and have one of the best rookies in the Association this season in Kyle Kuzma.

Loyal fans will remain loyal. All others are wondering what the long range plans are for this team.