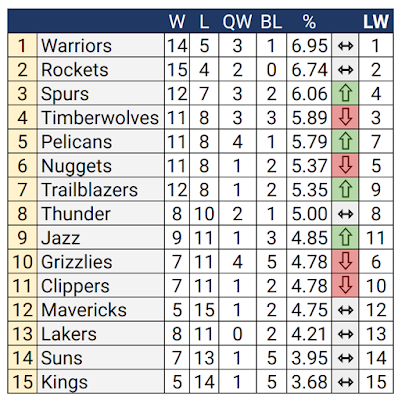 It’s unlikely that many are surprised to see the teams rising to the top of the Western Conference rankings. The Warriors were the prohibitive favorites, the Rockets and Timberwolves improved in the off-season and the Spurs have a perpetual top spot guaranteed to them by NBA contract. Well, that an incredible coaching, good players and a system that works.

After that though, the West gets murky.

The LAPB is not sold on the Pelicans, but they continue to win and are tired for most Quality Wins. The Nuggets and the Blazers look to be interchangeable while the Thunder are still trying to find themselves. The Jazz and Grizzlies both started strong and are settling into where they will most likely end their season.

Which leads us to the interesting part of the rankings this week. The Clippers come in at the 11 spot. Injuries have taken their toll, again, while the evolution of Blake Griffin as “the man” has seen its ups and downs. There are lots of problems with losing, one of which is the unavoidable trade rumors. This time around DeAndre Jordan is the target. Will he stay, will he go? Is he worth the money he will most likely be requesting? Is it time for the Clippers to start over by trading him?

Great questions which are no doubt being pondered by Clipper executives at this very moment. If the Clippers continue to lose the decision will be made for them however.

The bottom four may be controversial. The Lakers are playing well. They have shown improvement over last season, are playing good defense when its needed and winning games they would have lost in years past. Yet, they come in at 13 below the Mavericks who have a worse record. This is where the mathematically inspired rankings come into play. The Lakers remain the only team in the WC without a Quality Win.

The Suns and Kings are good teams with bright futures but they play in the Western Conference so they hold all the other teams up.