I love to write. It’s an odd passion for someone working in technology who didn’t do particularly well in High School when writing was a requirement. My passion came to light later in life unfortunately. I started writing in the technology sector after buying and loving the very first Android phone ever sold, the G1. I am still grateful to AndroidGuys.com for giving me my start and pointing me in the “write” direction.
Sorry, I couldn’t help myself.
It wasn’t long after I started to write that I began to merge my new passion with my old one, sports. From AndroidGuys I went to OCMetro where I covered the Los Angeles Angels of Anaheim California USA World Universe Milky Way. Which is, in fact, their real name.
Or not, I’m not sure.
Then BleacherReport came calling and I became the Featured Columnist for the Clippers. Well, they didn’t really call, they more replied to an email I sent, but you know, they wanted me!
When I started writing for the Clippers they weren’t good. While most aspiring writers for the relatively new website wanted to cover the Lakers, I was happy to cover the love-able losers out of LA.  Maybe it’s just me, but I found it a lot easier to write about a team that was struggling than one that was winning. Over the years I wrote about the time a Clipper player yawned during a huddle, how the Clippers had an answer to the Lakers Jack Nicholson and even scored an exclusive “interview” with Blake Griffins damaged knee while he was out in the XX season.
Now, I’m happy to cover both professional basketball teams in Los Angeles in a way only a fan can.
Considering that I started writing in tech and continue to work in the field it makes sense that I tend to look at things from a somewhat technical perspective. The Clippers are not immune to this odd view point. In fact, they line up with technology in an oddly effective way. 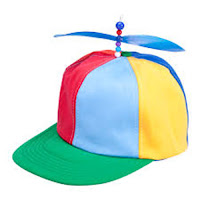 Don’t believe me? Put on your propeller hat and read on.

The first analogy is the most obvious. Steve Ballmer made his money in Tech. He was the 30th employee hired by Microsoft in 1980. This was before they were the behemoth they would become. As the head Clipper I liken him to Apple, the head Tech company today.

I imagine that Ballmer will not appreciate the link, but on we go.

Chris Paul was the consultant who was brought in to kick start a project. This happens all the time in Tech with companies like Deloitte, Accenture, Bain & Co. and several others being brought in to provide direction in a particular area. When the Clippers were handed, I mean traded for, CP3 he was thrown in the middle of a mess. To his credit, when he left the franchise was in a better place than when he joined them.

Let’s remember than when Houston comes to Staples January 15 Clipper fans!
In Tech the promise of the future is and has been the cloud. This odd collection of interconnected data centers has nothing to do with an aerosol comprising a visible mass of minute liquid droplets, frozen crystals, or particles suspended in the atmosphere above the surface of a planetary body. Which is, of course, the meteorological definition of a cloud!

For the Clippers the promise of the present and near future is and has been Blake Griffin.
We mentioned earlier that the cloud is made up of a lot of interconnected data centers. With more and more large companies migrating to the cloud those data centers need to be secure. Today it is safe to say and not much of a stretch to say data centers are as secure as Fort Knox. For the Clippers, the player charged with security is DeAndre Jordan.

Data centers are notorious for not being able to make a shot outside of the painted area, so there is that similarity as well.
Vaperware is a negative term in Tech for a product that is announced but not yet available. In short, its a tease. A promise for something in the future that some company wants you to invest in today. Wesley Johnson has been the Clippers vaperware for a few years. How is this guy not a better player than he is?

Now, with the team in the midst of their normal bout of injuries and outages the team needs Johnson to go from vaperware to, ummm, actual-ware.
Austin Rivers is the application or technology you want to love but just cant, yet. When smart watches became a thing I was excited. I wanted to love them, but I can’t. I mean, I carry my phone with me all the time, why do I need a watch that does less than my phone does? The same type of apathetic response sums up Rivers career with the Clippers. I see why some like him, I see why some don’t. I just wish he would develop that one killer advantage that makes him indispensable.

We are still waiting.
If you are a Techie you know how frustrating it is to talk to a non-techie about the latest and greatest (insert your favorite technology here). I worked with a guy once who paid $1500 for the first iteration of Google glasses. He was thrilled, but was met with a chorus of yawns from most everyone else he showed his new “investment” too. Milos Teodosic is kinda like that .

Teodosic is someone who thrills most basketball purists. They marvel at his court vision and pin-point passes. Take an average fan to a game and point out the Serbian basketball magician however and they may look at you like my wife did when I marveled at the Google Home.

In case it is not clear, my wife did not join me in marvelling at the Google Home.
Lou Williams, we hope, is 2.0 to Jamal Crawford‘s 1.0. Every good software program gets upgrades. Generally, the next iteration brings some improvements. On paper, Williams is the new and improved Crawford.
Back when the Internet was relatively new some marketing geniuses thought it would be amazing to introduce the pop-up screen as a way to promote. The pop-ups were annoying and persistent and if you made the mistake of “accidentally” hitting an adult page the pop-ups were relentless.

Years ago my wife saw some article of clothing she really liked at Chicks Sporting Goods. When she arrived at home she powered up the computer and typed “Chicks” in the search engine, because, of course she did. The screams I heard from the office were a mixture shock and disgust. Her innocent attempt to find something online was greeted with an un-ending stream of promotions for all manner of adult entertainment.

Yes, I laughed and yes, I will likely tell that story at the Thanksgiving table for the 15th or so year in a row this year!

I say this with all due respect, Patrick Beverly is the annoying pop-up that wont go away. The Clippers have not had a player of his skill and mindset since…ever. Matt Barnes has the attitude, but not the game that Beverly has. I believe that it was his play against Lonzo Ball to kick off the rookies professional career that has, in part, contributed to Balls rough start.

When software or hardware is either replaced by something better or simply becomes obsolete, it reaches its End of Life. The item is no longer sold. Companies then  announce they will no longer support the application or hardware. The technology is left to wither and die a sad and lonely death.

Moment of silence for Novell NetWare, Microsoft Bob, Lotus Agenda, the walkman, landline phones and the dial up modem.

At 5-10 the Clippers may be in trouble of reaching their End of Life sooner than expected.