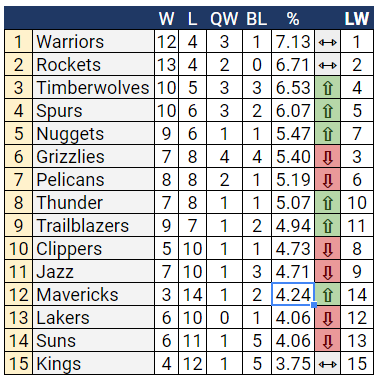 Last week we talked about the possibility that the West is a two team race. Nothing in the fifth week made us think it isn’t going to be. Are the Rockets really as good as their record? We are not sold at the LAPB, but you can’t deny that they are the only team in the Western Conference who has yet to post a Bad Loss! That is impressive.

The fact that the Spurs are this good without their best player is frightening and telling. Frightening for the rest of the Association and telling in regards to just how good a coach Pop is. I know that’s not new, but it’s easy to forget. Popovich coaches a team, not a group a players. May seem like an odd distinction, but we believe that’s the secret of the Spurs success. Play like a team regardless of who puts on the jersey. Not many coaches can pull that off, Pop can and Pop does.

The middle tier of teams are boring.

The Clippers are hoping to claw their way back up to the boring middle tier soon. The panic button is not ready to be pushed in Clipper headquarters, but the button is no doubt within reach of Steve Ballmer. This is not meant to be a knock on Doc Rivers, but the Spurs remain good, even elite, without a two-time All Star and First Team All-Defensive player in Kawhi Leonard while the Clippers flounder without Beverly, Gallinari and Teodosic? Combined that trio has Zero All-Star games to their credit and a single First Team All-Defensive nod. The Clippers need to get things worked out and quick.

The other Los Angeles professional basketball team is a bit of a mystery. Their record is not bad when compared to years past. The Lakers seem to be in most games they play. They compete and their defense is much better than it used to be, which isn’t saying much because their defense was non-existent in the past. That all being said, they are the only team in the Western Conference without a Quality Win. They are winning the games they should, which is good, but they remain in search of that elusive next step.

Did you notice the Mavericks at the 12 spot with a 3-14 record? Sorry Laker fans, but the young guns from Dallas rank above your squad this week. While they only have three wins they came against the Grizzlies, Wizards and the Bucks. Three good teams! The LAPB ranking method is not based on records, winning percentage or gut feel – it’s based on math and science and smart things. Wins matter, wins over good teams matter more.