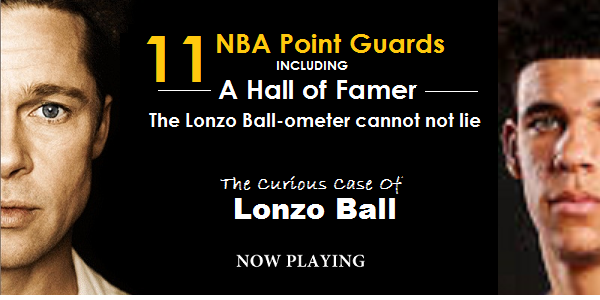 As fans the LAPB know we have been ranking Lonzo Balls progress in his first NBA season in the Lonzo Ball-ometer. You can read the detailed description here if you haven’t been keeping up. In short, we rank Balls performance after each game against the greats and not so greats.

Now, normally, I wouldn’t be a proponent of comparing a player to someone who came before him. On top of not being particular fair, sometimes its the kiss of death. Ask Harold Minor or Greg Oden. Respectively, they were the next Michael Jordan and Bill Russell.

Ball is unique however, in more ways than one. His dad was the first to start the comparisons when he said that to him his son was a better player than Stephen Curry. Later he shared that he was confident his son would be a better point guard than Magic Johnson.

I still shutter at that statement.

It’s important when considering the uniqueness that is Lonzo Ball to understand how important confidence seems to be to the family. You see, I don’t necessarily believe LiAngelo’s dad believes his son, Lonzo, will actually surpass the career of the greatest point guard to ever play the game. Instead, I believe he is confident that its possible.

It may be a minor distinction to some, but its an important one. Its not that Lonzo will be, its that Lonzo can be.

When you consider the audacity of his statements in that light they become a bit more palatable. Can Lonzo surpass Magics career, I mean, sure. Its possible. Not likely, but certainly possible. Which brings me the secret sauce that I think drives LaMelo’s dad and Lonzo as well, confidence.

Both these men are supremely confident. Extraordinarily confident in fact. Often times, that is half the battle that can lead to success.

It takes confidence to say what Lil Dicky’s dad is saying. Consider however how much confidence it takes for Lonzo to hear it. When interviewed the Lakers point guard never seems to back down from his dads claims, in fact, he doubles down saying things like “I believe I can be the best”. Confidence is a powerful thing.

Of course, confidence alone won’t get you too far. I can be confident in my ability to fly but when I leap off my roof I will likely face plant on the lawn. If I’m lucky. Confidence is the secret sauce, but if you are going to excel in the Association you need to back it up with talent and ultimately numbers to back up the claim.

That is were Ball, so far, falls short.

Those numbers aren’t pedestrian, but certainly not even in the same vicinity as Johnson. Honestly, he isn’t even in the same hemisphere. Johnson through his first 10 games averaged 18.9 ppg. For some reason I wasn’t able to find his assist and rebound totals for his first ten games. I imagine they were higher than 6.9 and 6.4 but even if they weren’t averaging an additional 10 points would offset those stats.

I mean, come on after all, this is Magic Johnson we are talking about. Ball, thus far, just doesn’t compare.

In fact, the Ball-ometer, which cannot not lie, has Ball registering only one game above a Rubio. Most of his games to date have come in at the Parker level. That’s Parker as in Smush Parker, famed Kobe Bryant nemesis, for those that didn’t read the detailed Ball-ometer description yet. That alone should send shock waves across Laker Nation.

So, what are we to make of Lonzo Ball? In an world that has embraced analytics in sports, numbers tell a story. They tell a story that matters and Balls numbers are simply unimpressive. Yet, the Lakers are winning. Better than that they are running. Best of all, here in L.A., they are “Showtiming”!

It’s true that his shot is off and his offensive numbers are weak at best. Ball however makes the right pass. He stays in control most of the time. Above all else, he is a very good rebounder. A number not normally associated with a good point guard (apologies to Russell Westbrook, who is also a measuring stick in the Lonzo Ball-ometer).

No, Ball is not setting the Association on fire through 10 games like we hoped and his dad likely anticipated. No, he will likely not win ROY, as of this writing the lock for the award plays in Philly. He is not the best rookie in the impressive class of 2017. In fact, so far, he is not even the best rookie on his own team.

He is however confident, supremely confident.

Over time, his shot will improve. Remember, numbers tell a story. Stephen Curry’s totals through his first 10 games are actually on par with those of Ball. Curry averaged 8.9 ppg with 2.6 apg and 4.7 rpg. His shot started to fall and so will Balls. When it does and it catches up to his rebounding and overall play making skills and is then combined with that unparalleled confidence we may actually see the player Mr. Ball predicted we would see. It might not be this season, but it could happen.