For those that need a refresher, click here to read how we arrive at these rankings. This is the only non-biased, no emotion ranking system devoid of gut feel. 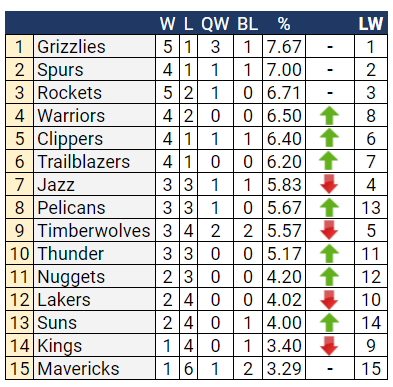 Are the Grizzlies for real? I’m not sold, but numbers don’t lie. They lead the NBA in wins and more importantly, in Quality Wins. At the start of the season the Griz were labeled a Good team, not a Quality team. Keep this up and it will be time to re-think that.

How are the Spurs still good? I have been asking the same question every season dating back a few seasons. Smoke, mirrors and Popovich, I guess.

All the Clippers had to do to take the top spot was beat a mediocre team from the East. They led against the Pistons and looked like they might be able to get a win and go into week 2 as the #1 team. Clearly the pressure of being on top of the LAPB mathematically inspired ranking system was too much for the Clips. Despite the Bad Loss they still move up one spot.

While the Grizzlies may be better than we thought, the Timberwolves may be worse. They drop 4 spots and have yet to jell as a team.

The only real hope the Lakers had this year was if Lonzo Ball was a transformative player. So far, he is not. Check out the Lonzo Ball-ometer for more detail. This is a team without an Alpha and so far showing only limited interest in playing defense.

The Kings are free falling.

While there was a lot of movement in the middle for the board, the top three spots and the bottom one are unchanged. Unfortunately for the Mavericks, they are the ones holding the rest of the teams up. Even worse for the Mavs, they may be there a while.