If your initial reaction to this post fits into the general opinion outlined in the above paragraph, please click here for a detailed explanation.

For the rest of you, please read on. 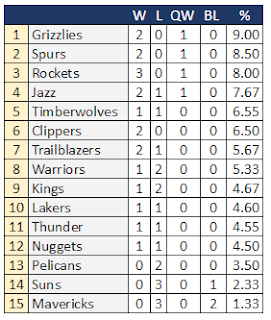 In addition to tracking wins and losses we are going to track a Quality Win (QW) and a Bad Loss (BL). Identifying a win against a Quality win or a loss against a Bad team will help to see why the rankings play out the way they do week to week.

After just a few games it really is difficult to gauge the talent of a team. Wins and losses do not lie however so after adding the numbers into our closely guarded spreadsheet, the Grizzlies officially won Week 1.

In addition to being 2-0 they beat the defending champs which, as explained above, is a Quality win. They also beat the Pelicans who, for now, are designated a Good team.

No one outside of Memphis expects this to last, but for now, this is your time to shine Griz!

Rocket fans may have a legit gripe as their 3-0 record is the best in the Conference. However, two of those wins came against Bad teams, the Kings and the Mavericks. Sure, you have to beat the Bad teams too, but our calculated and meticulous system does not reward those wins as much as those against tougher opponents.

Rockets come in at the three spot.

The Clippers have played well. They play a different style of basketball without Chris Paul that so far seems to be working for them. No one is going to argue that Patrick Beverly is a better player than Paul, he isn’t. A good argument to make however is that this team, with Beverly at the point, may be as good as any Clipper squad led by CP3.

The Thunder will get it together.

The Pelicans are a concern. The Association completed the transition to “small-ball” some time ago. The Pels seem to be the crotchety old man mumbling about the way things used to be. They have two of the best big men in the Association, no question. How impactful can they be in a league that now is dominated by wings?

The Mavericks lead the league in Bad losses. Ouch.

The Suns are losing to better competition than the Mavericks but they are losing by a lot. Double ouch!

The Lakers had a nice game against the aforementioned Suns. It was good to see Ball rebound from a tough first game. In the end, that game looked to be more about two bad teams with no real defensive presence fight to back their way into a win. The Lakers won the game, or the Suns lose it? It wasn’t the best payed basketball, but it was enjoyable to watch.